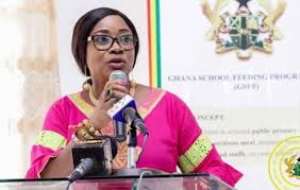 The fully furnished classroom block expected to ease congestion in the school was funded by Coastal Development Authority (CODA).

Addressing the Chiefs and people of Agona Edukrom last Wednesday, Hon. Cynthia Mamley Morrison noted that Government was committed to improving the academic standard of education in the Agona West Municipality.

She noted that this can only be achieved when a conducive environment for effective teaching and learning is provided.

She lauded the Management of Coastal Development Authority (CODA) for early completion of the 2-unit classroom block with office, store and toilet facilities couple with a recreational centre.

"This Kindergarten block is going to attract more kids to the school. The kids needs comfortable classrooms to study, and that is exactly what His Excellency Nana Addo Dankwa Akufo Addo led NPP Government is providing across the country.

"Cynthia Morrison has footprints in every community, especially in the educational sector. I have personally constructed classroom blocks for Basic Schools at Agona Bobikuma and Nkum among others aside from provision of furniture and learning materials. I have an interest in education as an educationalist," she stated.

She tasked the school authorities to cultivate a culture of maintenance to sustain the new facility.

The Agona West Communication Officer of the NPP, Mr. Isaac Osei Somuah popularly known as 'Kofi Osei' later in an interview disclosed that the Constituency Executives led by Alhaji Tanko Gibril were working hand in hand with Hon. Cynthia Mamley Morrison and the Agona West Municipal Assembly to ensure early completion of all ongoing projects in the Municipality.

The Communicator noted that the party would showcase government projects and social interventions for the constituents to appreciate the brilliant performance NPP government in Agona West in particular.

"As a Communicator, my priority is to trumpet achievements of the NPP government through community engagements and cordial relationships with media practitioners. Breaking the Eight requires intensive collective efforts," Mr. Osei Somuah noted.