'Not in the regime's DNA': authoritarian Burundi's slow reopening 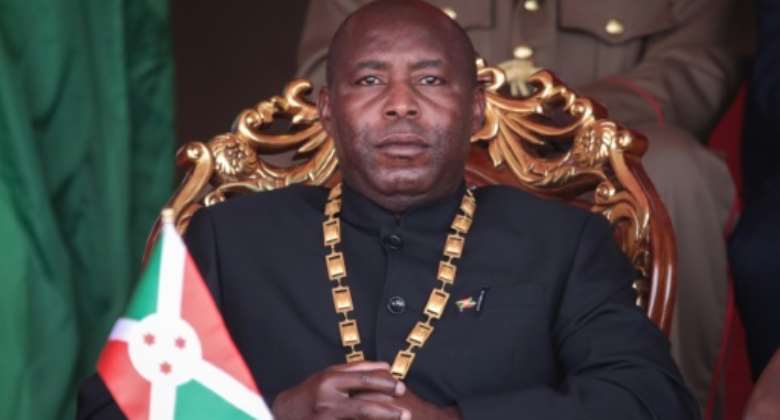 A fresh start, or just a fresh face?

In Burundi, this has been an open question since President Evariste Ndayishimiye took power two years ago, ending years of isolationism to great fanfare, but failing to improve its dire record on rights abuses.

His election in May 2020 offered promise after the chaotic and bloody rule of his predecessor, who launched a crackdown on political opponents in 2015 that left 1,200 people dead and made Burundi a global pariah.

Ndayishimiye "has brought a breath of fresh air to Burundi. This is to his credit. He gives the impression of a real sincerity in wanting to improve things," said one diplomat in Bujumbura, the country's economic capital.

Handpicked by the ruling party, Ndayishimiye was expected to remain under the wing of former leader Pierre Nkurunziza, who declined to run again but retained a cult-like persona as Burundi's "supreme guide".

But just a month after the election, Nkurunziza suddenly died, and the new leader began to chart a different course.

Ndayishimiye turned heads by declaring the coronavirus pandemic "the greatest enemy of Burundians", sharply breaking with Nkurunziza who denied the gravity of Covid-19 and claimed God had spared his country the disease.

Whereas Nkurunziza had closed off his country -- rowing with neighbours, expelling diplomats and foreign journalists, and blacklisting UN investigators -- Ndayishimiye ventured abroad, slowly putting his country back on the map.

He addressed the UN General Assembly -- with which relations remained strained -- attended an EU-Africa summit in Brussels, and made official visits to neighbours and further afield to places like Dubai.

Ndayishimiye was expected to remain under the wing of Pierre Nkurunziza, who retained a cult-like persona as Burundi's 'supreme guide' until his death in June 2020. By TCHANDROU NITANGA (AFP/File)

"Internationally, it is very clear, these are very clear advances. Burundi is regaining its place on the international scene after having been self-isolated," said another diplomat, also on condition of anonymity.

Earlier this year, the United States and the EU resumed aid flows to the landlocked nation of 12 million after easing sanctions imposed in response to Nkurunziza's violent purge of critics.

Civil society groups have returned, the BBC is allowed to broadcast again and the European Union -- Burundi's largest foreign donor -- has commended efforts to fight corruption.

"He would like to go further, but faces stiff resistance."

In Burundi, this resistance has a name -- "the generals", a cabal of military leaders that analysts say pull the real levers of power.

Forged underground when the ruling party was a Hutu rebel movement, these generals outnumber Ndayishimiye, who has few known allies, analysts say.

The president himself alluded to his isolation during a speech in 2021.

"There are those who tell me I will die of exhaustion trying to flush out wrongdoing from top to bottom. (But) how do you expect me to do that when I haven't found anyone to help among my staff?"

But analysts point out that Ndayishimiye himself was an army general, a high-ranking ruling party cadre, and question how far he is willing to change the status quo.

Nkurunziza launched a crackdown in 2015 that left 1,200 people dead and made Burundi a global pariah. By Marco LONGARI (AFP/File)

Many opposed the rapprochement by major powers, warning gross violations by state actors in Burundi had continued under Ndayishimiye, and the old regime was alive and well.

Human Rights Watch in May described politically-motivated murders and kidnappings by police and state-backed youth groups, while a UN inquiry last year characterised the rights situation in Burundi as "disastrous".

"There are certain aspects where there has been no progress. I am thinking in particular of torture, abductions, forced disappearances," said Carina Tertsakian from the Burundi Human Rights Initiative, which criticised the decision to lift sanctions.

Burundi remains much like a single-party state, analysts say, and opposition movements are muzzled even if ostensibly permitted.

Civil society may exist, but self-censor out of fear.

"Many civil society organisations, especially those on the ground, avoid working on sensitive issues of governance and human rights," said Faustin Ndikumana, president of PARCEM, a non-governmental organisation that focuses on good governance.

Its fortunes under Ndayishimiye remain mixed: on one hand they are actively consulted by the government, on the other their press briefings are broken up by police.

"After Nkurunziza, we are moving into a phase of decompression, but that doesn't change the DNA of the regime," said Thierry Vircoulon, a specialist in Central Africa at the French Institute of International Relations.

"The power remains the same, that is to say fundamentally authoritarian."