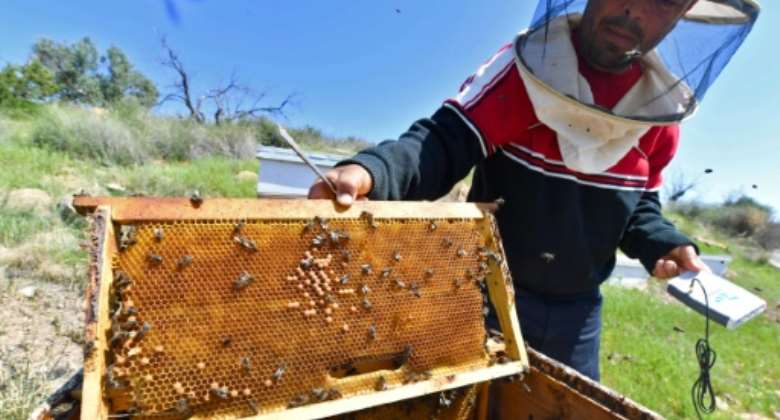 Elias Chebbi inspected a beehive in a field in Tunisia, minutes after a buzz on his phone warned him of a potential problem.

The 39-year-old beekeeper opened a flap in the hive to reveal a low-cost, locally made sensor dedicated to measuring key environmental variables. An app on his phone then warns him if action needs to be taken.

"Thanks to this, I can relax," he said. "It tells me remotely everything that's happening."

Chebbi has two of the sensors, entirely produced in Tunisia by the only company of its kind in North Africa.

He periodically places one in each of the 100 or so hives he keeps, on a grassy hillside an hour's drive from the capital Tunis.

The devices, each costing under 300 Tunisian dinars (around 92 euros), send live updates on temperature, humidity and the weight of the hive to a central computer.

It then analyses the data and helps him react quickly to potential problems -- as well as selecting the most resilient, productive queens for breeding.

That is a major asset as bee colonies face multiple threats, including climate change and increasingly common collapses of entire hives.

According to the UN's Food and Agriculture Organization, three quarters of the world's main crops depend on pollinators -- but the insects are in decline worldwide. By FETHI BELAID (AFP)

Chebbi remembers being stung by a sudden heatwave in 2013, before he started using the system, when he lost around a quarter of his hives.

"I had big losses, 26 hives, because of humidity and the sudden change in temperature," he said.

But since he started using the SmartBee system -- developed in 2020 by a group of young Tunisian engineering graduates -- his losses have dropped dramatically, to under 10 percent of his hives in a given year.

He has also boosted his honey production by 30-40 percent.

Today, Khaled Bouchoucha, 34-year-old CEO of manufacturer Beekeeper Tech, says the sensors gather "a huge amount of information on the bees' yield and the threats they face".

The gadgets "gather reliable data in real time, so beekeepers can make good decisions and avoid collapse of their hives", he said.

This data is then fed wirelessly to the company's cloud computing system, which analyses it to identify potential problems.

If it does, it sends a warning to the beekeeper to intervene -- by cooling overheating hives, adding insulation to those that are dangerously cold, or providing sugar solution to those whose weight shows that they have not produced enough honey to survive the winter.

Beekeeper Tech has sold over 1,000 of the systems, mostly in Tunisia and neighbouring countries.

Bouchoucha says customers are swarming to the app and the firm's workers are preparing another 1,500 orders for customers in Libya, Algeria, Saudi Arabia and even New Zealand.

The devices, each costing under 300 Tunisian dinars (around 92 euros), send live updates on temperature, humidity and the weight of the hive to a central computer. By FETHI BELAID (AFP)

Bee populations around the world are facing disaster from overuse of pesticides, mites and temperature extremes due to climate change.

That also spells catastrophe for humans, as we depend on pollination by bees for over a quarter of all the food we consume.

According to the UN's Food and Agriculture Organization, three quarters of the world's main crops depend on pollinators -- but the insects are in decline worldwide, mostly due to human activities.

Beekeeping itself is also a vital livelihood for many.

In Tunisia, with its population of 11 million, the sector employs some 13,000 people and produces some 2,800 tonnes of honey every year, according to its agricultural union.

The FAO marks a World Bee Day every year on May 20 to raise awareness about "the essential role bees and other pollinators play in keeping people and the planet healthy."

The SmartBee app offers more than an early warning system.

The SmartBee app offers more than an early warning system: the data it collects also tells beekeepers about the health and productivity of each hive. By FETHI BELAID (AFP)

The data it collects also tells beekeepers about the health and productivity of each hive, its resistance to changes in climate.

Mnaouer Djemali, chief scientific officer at the National Agronomic Institute of Tunisia and a co-founder of Beekeeper Tech, said data from the hives "enables us to measure the profitability of each queen" and to select the best for breeding.

"That can help us boost our food security and sovereignty," he said. "We are sorely in need of that in a world full of diseases and wars."