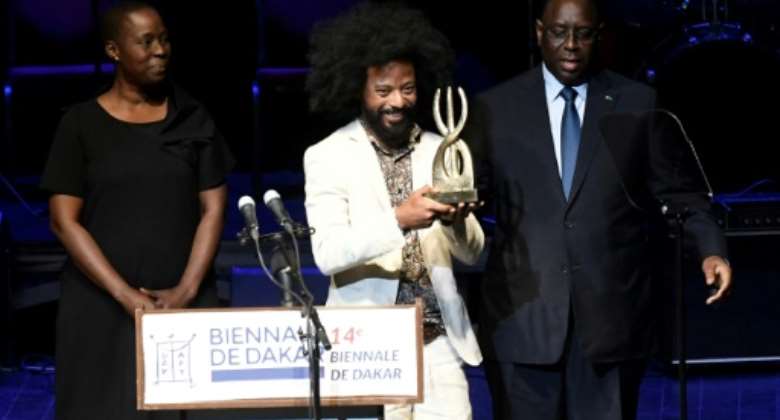 Ethiopian painter Tegene Kunbi Senbeto was awarded for three of his large compositions of brightly coloured geometrical blocks on canvas. By SEYLLOU (AFP)

The 14th edition of the Biennale of Contemporary African Art, the continent's largest contemporary art event, opened Thursday in Senegal's capital with the top prize awarded to an Ethiopian painter.

After a two-year delay caused by the coronavirus pandemic, the event will until June 21 showcase works by the continent's top names in photography, sculpture, textiles and performance art.

"It's a celebration of the visual arts, of human genius and spirit, an event that has resisted the vagaries of time for over 30 years," said Moustapha Ndiaye, chairman of the exhibition's steering committee.

Diabate, who comes from a long line of traditional storytellers, poets and musicians known as griots, interspersed his electrifying show with spoken messages directed to Sall, who is currently the chair of the African Union.

West African states including Senegal slapped economic and diplomatic sanctions on Mali in January after the ruling junta proposed staying in power for up to five years.

"The African griot is here this morning to entertain you here in Dakar, and to tell you that Mali and Senegal are the same country," he said in French, to applause.

"Mr. President, I'm here to show Mali's love for you and to make you change your mind," he said, in an apparent reference to the sanctions.

"Yes, we love you, Mr. President, and we also express our grievances so that the situation can change for my country, Mali," he pleaded.

The international event includes nearly 300 exhibitions in Dakar and the nearby islands of Ngor and Goree. Exhibitions are also being held in other cities around Senegal.

The last biennale, in 2018, generated more than 8 billion CFA francs ($12.9 million at current rates) in transactions, according to Ndiaye.

Several other prizes were awarded to artists from Benin, Tunisia and Senegal.