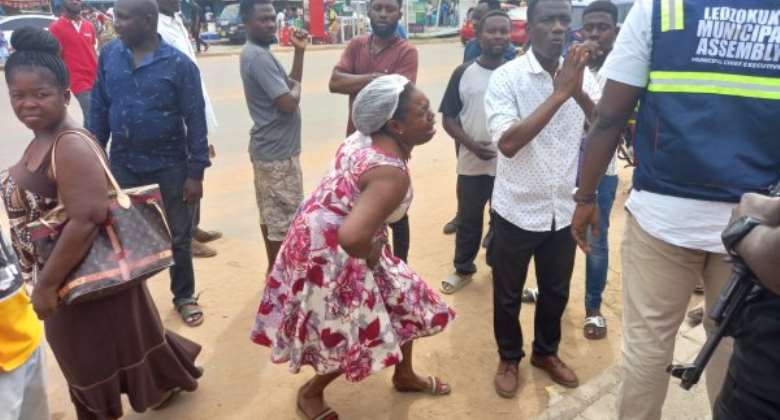 The Ledzokuku Municipal Assembly (LEKMA) has carried out a demolition exercise to clear containers and other illegal structures along the Spintex road.

Over 200 illegal structures, some of which served as accommodation, garages, vulcanizing shops and 'chop bars' (Local eateries), were brought down by the taskforce.

While some structures were completely destroyed in the exercise, others were salvaged by their owners.

The exercise, which was supervised by officials of the assembly with support from the Ayawaso West and La Dadekotopon Municipal Assemblies was carried out around the Manet Junction.

Mr Mordecai Quarshie, the Municipal Chief Executive (MCE) of LEKMA, who led the exercise said the exercise was necessary to make wake for some road expansion project along the stretch.

Notice had been served to the squatters, he said and explained that apart from the eviction markings on the structures, the assembly also engaged the people and advised them on the need to leave the place.

The Quarshie said the Assembly had put in monitoring measures to prevent the squatters from occupying the place again.

Some of the affected persons condemned the assembly for the manner in which the exercise was carried out.

They described the exercise as inhumane and blamed officials of the assembly for the impromptu manner the entire demolition was carried out.

Others also said the demolition exercise took them by surprise and some also confirmed that they were notified to vacate the place.