Time running out to save Horn of Africa lives: UN 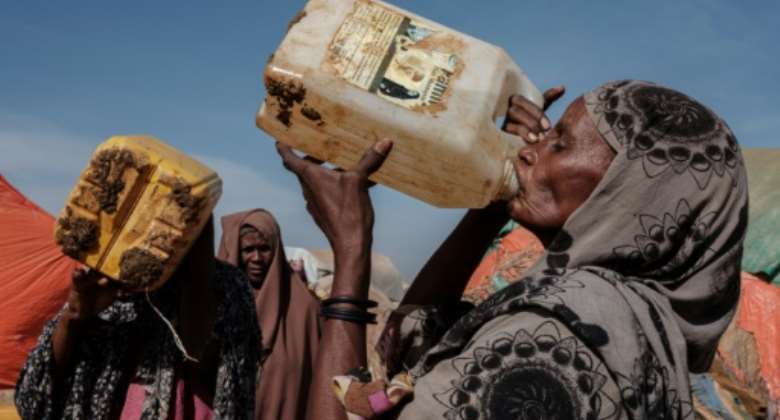 The Horn of Africa is experiencing one of the harshest droughts in living memory, with more than 15 million people facing high levels of acute food insecurity and severe water shortages across Ethiopia, Kenya and Somalia, the UN said. By YASUYOSHI CHIBA (AFP/File)

The United Nations appealed Thursday for immediate funds to help the Horn of Africa, warning the intense suffering in the drought-stricken region would likely get worse.

"We're out of time. We need money urgently to save lives," UN aid chief Martin Griffiths told a press conference in Geneva, following a two-day visit to Kenya.

The Horn of Africa is experiencing one of the harshest droughts in living memory, with more than 15 million people facing high levels of acute food insecurity and severe water shortages across Ethiopia, Kenya and Somalia, the UN said.

The number could reach 20 million if the current below-average rains fail.

"It's likely to get a lot worse for more people in the weeks ahead," Griffiths said, with prospects for the next rainy season from October to December "as dire as the last four" seasons.

Griffiths said the crisis threatened not only lives but people's way of life.

Across Kenya, Somalia and Ethiopia, about 5.7 million children are acutely malnourished, while over three million livestock -- which pastoralist families rely on for sustenance and livelihoods -- have died, says the UN.

Griffiths said displacement was the main issue emerging from his talks in Kenya.

Ethiopia was facing both drought and conflict and if the fighting in the north gets worse and spreads, "we do need to fear" for a wave of people fleeing the country's borders, he said.

Griffiths said the Horn of Africa was "particularly underfunded" and funds invested there would be "money well spent... because the suffering is so intense".

In the Sahel region, the situation was "similarly dire".

Up to 18 million people in Africa's semi-arid sub-Saharan belt will face severe food insecurity over the next three months, he said.

The UN humanitarian agency launched its 2022 appeal in December, seeking $41 billion to help 274 million in need of humanitarian aid and protection.

Griffiths said donors had so far contributed almost $6 billion so far -- a record high at this point in the year.

But since humanitarian funding has levelled out at about $19 billion a year and the 2022 bill has risen, "we're not even going to make it halfway", he said.

Latest Photo Reports
Catch up with all the political quotes from our politicians.
Advertise here
More from Africa
ModernGhana Links
ECOWAS seeks consolidation of democratic gains through consultation with its ambassadors
Security tight in Eswatini on protest anniversary
First ever 'Africa Fashion' exhibition opens in London
TOP STORIES