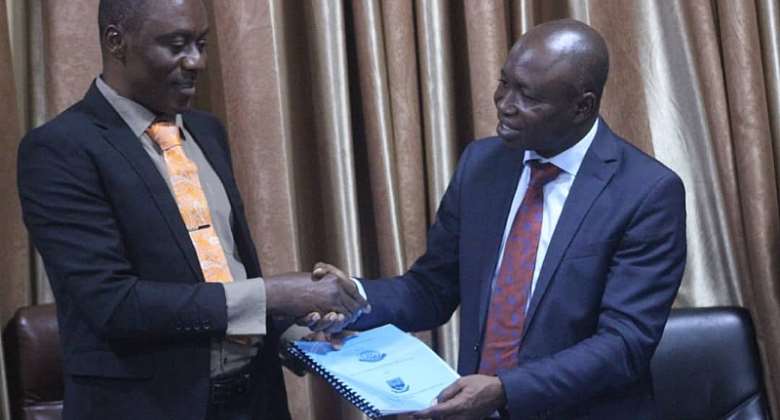 The two public universities in the Bono region, the Sunyani Technical University (STU) and the University of Energy and Natural Resources (UENR), have signed a Memorandum of Understanding on areas of mutual interest and also to contribute to the development of the region.

The potential areas of collaboration, as captured in the MoU, include joint research activities, publications and scientific dissemination, under-graduate students’ activities, affiliation of academic programmes, joint supervision of post-graduate students’ thesis and dissertations, joint application for research funding and facilitating access to laboratories, workshops and libraries as well as exchange of students and staff, among others.

The Vice-Chancellor of STU, Ing. Prof. Kwadwo Adinkrah-Appiah and his counterpart from UENR, Prof. Elvis Asare-Bediako could not hide their joy in reaching this far in the history of the two institutions, especially as they would be expected to see themselves as collaborators working to achieve a common goal and not as competitors.

Ing. Prof. Adinkrah-Appiah noted that the two institutions of higher learning have a number of things in common which could form the basis for the partnership.

“We have so many things in common. First of all, we are both in the same region. We are the giant-universities in the Bono region…Besides, we (STU) have not less than five of our students at UENR pursuing Masters and PhD programmes…I am also aware that UENR has been bring students here for laboratory work. So, the areas that we need to collaborate are quite many already,” Ing. Prof. Adinkrah-Appiah stated.

He also said some senior members of UENR are serving on various committees at STU and called for the strengthening of this partnership.

“So, basically we’re here today to sign a partnership agreement between Sunyani Technical University and the University of Energy and Natural Resources so that together, we can develop this region for it to positively affect our country Ghana and the world over,” he stressed.

For his part, the Vice-Chancellor of UENR, Prof Elvis Asare-Bediako noted that the best way to advance in various aspects of human endeavor today is through collaboration.

“We’re in the era that we cannot depend entirely on the government; that means we need to depend on each other, support each other and in so doing we would be able to lift each other”, Prof. Asare-Bediako added.

“When we move along, hold each other, then the two universities would move along to become the best universities in country, the top in African; then the region will also develop.”