If low-level public servant PPA boss was allowed to steal millions, I wonder how much Akufo-Addo has made — Vormawor 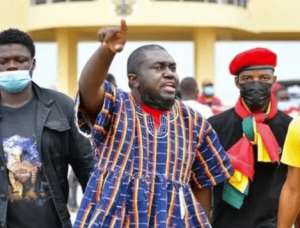 Convener for the #FixTheCountry Movement, Oliver Mawuse Barker-Vormawor has taken a swipe at the ruling New Patriotic Party (NPP) in a post on his Facebook page.

According to him, if a low-level public servant such as former Public Procurement Authority (PPA), Mr. Adjenim Boateng Adjei managed to seal over 15 million cedis, then he wonders how much President Akufo-Addo and other top government officials have made in the last six years.

“I wonder how much Nana Addo, Bediatuo, Bawumia, Kojo Oppong, Napo et al, have made as public servants. I wonder what Gabby has made as prime minister," Oliver Mawuse Barker-Vormawor said in a post on his Facebook page on Wednesday.

He adds that Ghana is not a poor country but its people are suffering because of the wicked generation of people leading the country.

The former PPA boss, Mr. Adjenim Boateng Adjei on Wednesday has been charged with eight (8) counts of using public office for profit and nine (9) counts of directly and indirectly influencing the procurement process to obtain an unfair advantage in the award of a procurement contract by the Office of the Special Prosecutor.

Meanwhile, Francis Kwaku Arhin, the brother-in-law of Adjenim Boateng Adjei has also been charged with one count of using public office for profit.

According to the Office of the Special Prosecutor, the two persons will be arraigned before the High Court (Criminal Division), Accra on Wednesday, May 25, 2022.