An Alan-Bawumia Ticket Will Not Fly 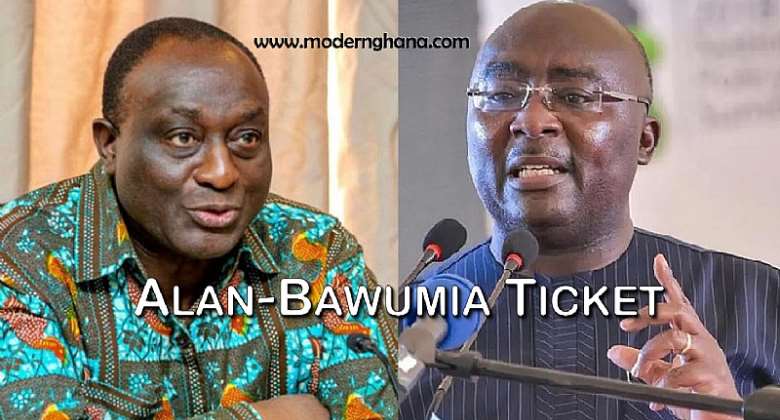 It is only perpetually and pathologically confused party operatives like Nana Akomea, the former Information Minister and former Communications Director of the New Patriotic Party (NPP), who can convince, as well as fool, themselves into believing that brazenly insulting the intelligence of the northern-descended members of the party, by deviously scheming to permanently convert the latter wing or membership of the party into what former President John “Akonfem-Kanazoe” Dramani Mahama aptly and strategically winsomely characterized as “Presidential Spare-Tires” and, to be sure, a strategically smashing gambit for breaking the proverbial “8”, in retrospect, and presently in the leadup to the watershed event that is the 2024 Presidential Election, would produce wonders of a kind that only Nana Akomea could imagine (See “Alan-Bawumia Ticket: Akomea Explains How President Veep Will Be Determined” Ghanaweb.com 5/6/22).

Personally, I wrote him off in the heated and chaotic leadup to the 2016 General Election, when the Akyem-Nsutam, Eastern Region, native curiously teamed up with some sharpshooting operatives of the National Democratic Congress’ propaganda machine to deliriously demonstrate against Mr. Yaw Osafo-Maafo, the current Senior Minister and Senior Adviser to President Addo Dankwa Akufo-Addo, because the Akyem-Awisa or Akyem-Oda native – it has never really been quite clear to me – had dared to call the proverbial spade by its proper functional and most accurate designation. The bone of contention back then had to do with the fact of whether Ghana’s Fourth Republican political culture was being inordinately controlled and/or dominated by ethnic minorities, who perceived our collective national resources to be their private and especial mine quarry or reserve.

For reasons that have never been quite clear to many of us avid students and observers of the country’s political terrain, Nana Akomea scandalously and grotesquely, joined by Ms. Ursula Owusu, presently Mrs. Ursula Owusu-Ekuful, the current Communications Minister, decided that the politically correct thing to do was to go on the attack against the former John Agyekum-Kufuor-appointed Finance Minister and, later, Sports Minister as well. Back then, as now, I was fully convinced that some backdoor horse-trading had transpired between these two middle-level operatives of the New Patriotic Party (NPP) and some smarter political strategists of the Mahama-led government of the National Democratic Congress. Now, I am still convinced that Nana Akomea is either a shameless party sellout or he simply is not as nimble-witted and strategically as savvy as he has been made to seem or perceived by a section of the general membership and some supporters and sympathizers of the New Patriotic Party.

For starters, it is immutably inconceivable to expect that Vice-President Mahamudu Bawumia, after dutifully, diligently and competently serving in his latter capacity for the constitutionally stipulated maximum of two terms, consecutively, would docilely and inadvisably consent to serving in the same “Spare-Tire” capacity for even a third term, that is, even assuming hypothetically that the New Patriotic Party was indisputably poised to clinching an as yet unprecedented third consecutive term at Jubilee House. Indeed, if any of the key operatives of the New Patriotic Party requires tutorials or professional preparation or training for the mature and serious business of the Presidency, that candidate is definitely none other than Mr. Alan John Kwadwo Kyerematen, the dynastic Trade and Industry Minister, that is, assuming hypothetically that the man really qualified for the post of the second most powerful and most significant elected Ghanaian leader, and not the man who has more than distinguished himself and more than amply demonstrated that, indeed, he knows how to bring home the bacon or handily win elections at the national level and on the topmost – or near-topmost – ticket of the party.

There is absolutely no need to keep harping on the patently pedestrian fact that as a major political figure in a democratic culture, Mr. Kyerematen has yet to demonstrate that he has any critical mass of electoral support beyond his party’s internal Presidential-Election Primaries. Even more significant to take into account is the fact that Mr. Kyerematen does not cut a convincing and a remarkable profile or portrait of an emotionally and psychologically balanced and mature adult who is also humble enough to fully appreciate the intricate contours of even party leadership, much less national leadership. We need to also critically examine his immediate reactions or gut reactions to the two times that he was handily trounced by then-Candidate Akufo-Addo and compare the latter’s far more mature and politically progressive and collaborative response to his defeat by then-Candidate Agyekum-Kufuor, in 1998 or thereabouts, and then we can draw some intelligent and constructive conclusions about just who best qualifies to be nominated Flagbearer of the New Patriotic Party, heading into the 2024 Presidential Election.

I have said this before and hereby reiterate the same – which is that going into the 2024 Presidential Election, Ghanaian voters will be looking for a well-groomed and visionary leader of substance, and not merely someone who misguidedly and delusively thinks and believes that he is entitled to the Presidency simply because he has been standing “online” relatively more than long enough. You see, Dear Reader, the Presidency is not about mere or sheer entitlement by self-approbation or self-acclamation; rather, it is squarely about who really has what it takes to move Ghana palpably up the development ladder. Of course, we can also not ignore the almighty, politically ubiquitous “Asante Factor.” But absolutely by no means can a politically presumptuous and a pathologically narcissistic Alan Kyerematen be so facilely confused with the authentic “Asante Factor.” The man even once claimed to be vying for the title and accolade of being “The First Fante-descended Ghanaian citizen to be elected President.” Now, come on, give us a break, Mister Nana (Is it Kwadwo or Kofi?) Akomea!