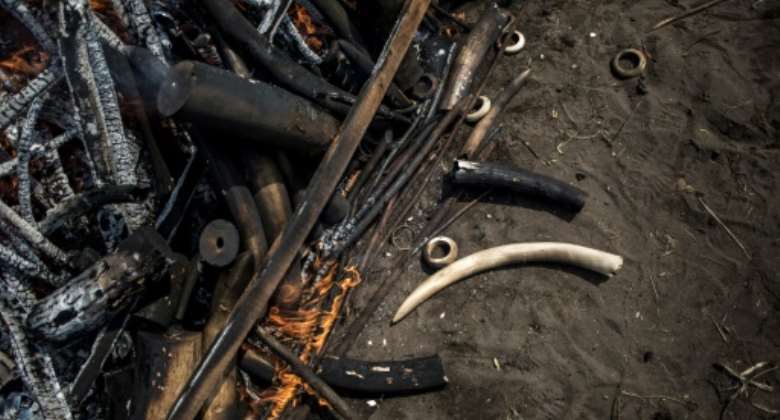 Poaching crackdown: Tusks and pangolin scales are burned at a ceremony in DR Congo's capital Kinshasa in September 2018. By John WESSELS (AFP/File)

Authorities in southeastern DR Congo have seized one and a half tonnes of elephant ivory, legal and environmental officials said, in one of the largest hauls in Africa in years.

Officers discovered the smuggled tusks aboard trucks in the city of Lubumbashi on Saturday, according to a legal official who declined to be named due involvement in an ongoing investigation into the affair.

Police arrested five people but two fled after questioning, the official said. He added that the haul amounted to 1.5 tonnes.

Both the origin and intended final destination of the ivory remain unclear.

Sabin Mande, a lawyer for a coalition of environmental groups, told AFP that he had seen 18 bags of seized ivory in the state prosecutor's office in Lubumbashi on Wednesday.

The contraband represents 80 to 100 slaughtered elephants, he said.

The seizure marks one of the largest in Africa in years. In 2013, Kenyan officials made several seizures including one of four tonnes. Togolese authorities likewise seized four tonnes of ivory over the course of one week in 2014.

In 2019, Vietnamese officials discovered over nine tonnes of elephant ivory in a shipment carrying timber from the Republic of Congo, also known as Congo-Brazzaville, in the largest recent haul worldwide.

China and Southeast Asia are major markets for African ivory, which is mainly used for purported cures in traditional medicine.