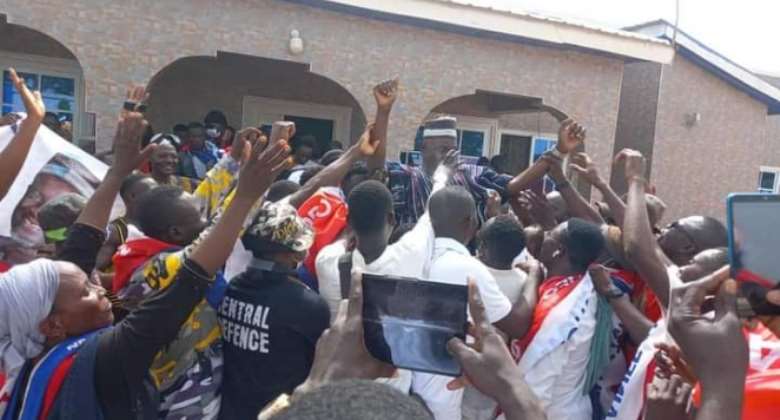 A coalition of NPP Youth in the Savannah Region have argued that incumbent regional chairman, Alhaji Iddrisu Sulemana popularly called Professor Kalamonia deserves to be retained to consolidate the gains made in the region by the governing party.

They made this pronouncement on Tuesday May 18, 2022 after picking and filing nomination forms for the incumbent chairman and impressed on delegates to renew his mandate to ensure continuity.

Lead convener of the coalition, Kanyiti Saburu Kantama said professor Kalamonia in the 2020 elections exceeded expectations and targets set by the party hierarchy by annexing three parliamentary seats for the party.

He added that the incumbent chairman also overwhelmingly increased the presidential votes from a target of seventy-two thousand to eighty-two thousand votes.

According to the group, Professor Kalamonia is a competent politician and has the charisma to attract floating voters that will inure to the benefit of the party in the Savannah Region.

They commended him for his performance as regional chairman to the fortunes of the party over the past few years especially in securing jobs for the teaming youth and the various support to artisans in the region and urged delegates to overwhelmingly endorse his re-election bid.

Speaking to the media at his private residence in Damongo, Alhaji Iddrisu Sulemana, thanked the youth for championing his re-election bid and paying the five thousand Ghana cedis (Gh¢5,000) filing fees.

He stressed that he has unfinished business to accomplish which include contributing his quota to the party's agenda of breaking the eight year jinx in 2024.

"Having the youth across all the region throwing their unflinching support behind me is an indication that i have marvelously performed well as regional chairman of the party and my mandate needs to be renewed to help break the 8 years jinx of governance".

He assured the youth that he will remain committed to their agenda when he is retained as chairman of the party in the upcoming internal elections.

Hottest Photo Reports
Catch up with all the political quotes from our politicians.
Advertise here
More from NPP News
ModernGhana Links
It’s ridiculous for NPP to seek equalization with IMF bailout – Sammy Gyamfi
NPP UK appoints executives for the next four years
[Video] NPP can break the 8 with a new face, not Bawumia – Addai-Nimo
TOP STORIES