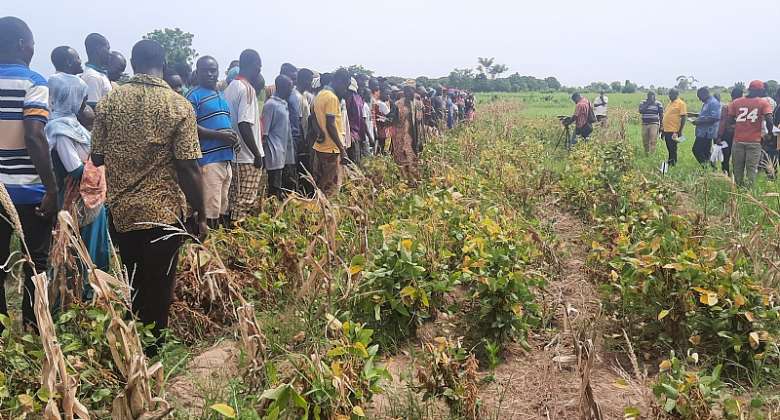 The Council for Scientific and Industrial Research – Savanna Agricultural Research Institute (CSIR-SARI) has developed a technology to increase the yields of grain legumes such as cowpea, bambara beans, groundnut and soybean.

The new technology, known as microbial inoculant or bio-fertilizer, has been proven to increase the yield of soybeans to three tonnes per hectare compared to the current yield, which stands at a maximum of one tonne per hectare.

A group of leguminous crops farmers in various communities in the district visited the demonstration farm to assess how the soybean inoculated with the bio-fertilizer was doing on the field.

Dr Edwin Akley, Research Scientist at CSIR - SARI, who explained the technology to the farmers at the demonstration site, said the new technology, while increasing the yields of grains would also improve farmers’ incomes, livelihoods and nutritional status.

The new technology is being promoted under the Participatory Pathways to Sustainable Intensification: Innovation Platforms to Integrate Leguminous Crops and Inoculants into Small-Scale Agriculture and Local Value Chains (PASUSI) project in Ghana.

The PASUSI project is being implemented by a consortium of institutions namely CSIR – SARI, University of Helsinki, Finland, Norwegian University of Life Sciences, Norway, and Makerere University, Uganda with funding from the European Union.

It seeks to improve productivity, livelihoods, nutrition and household well-being of farmers in the northern part of the country while counteracting environmental degradation.

The project is being replicated in eight districts including Tolon, Kumbungu, Nanumba North, Zabzugu, Yendi, and Tamale Metro in the Northern Region, and East Mamprusi and Bunkpurugu-Nakpanduri in the North East Region and about 10,000 farmers are expected to be reached under the project.

Dr Akley said “We are sure that when farmers use the new technology, there is going to be more nitrogen that will be fixed into the soil and the leaves of the crops will drop, and when the leaves drop, it is also going to improve soil fertility.”

He added that “So, when they rotate that field to the next crop, which could be millet, sorghum, or corn, what will happen is that in some cases, they do not have to apply the full mineral fertilizer that they need. They may apply half. So, indirectly, the farmers will reduce their production cost by 50 per cent if they adopt the new technology in their farming system.”

He noted, “Another advantage of using microbial inoculant is that unlike mineral N fertilizer that has issue with nitrate leaching into water bodies and contaminating the environment, when they use microbial inoculant, there is minimal of that; we do not have that problem.”

He stressed that the use of the new technology was also efficient in addressing issues of climate change amongst other environmental concerns.

Dr Akley, therefore, encouraged farmers to use “The new technology in the sense that we know currently the price of the mineral fertilizer especially urea is around GHc500. So, urea performs a role that is similar to the use of the new technology. So, that is why we want farmers to adopt the technology.”

Most of the farmers, who visited the site, lauded the new technology assuring that they would adopt it to improve their productivity.

Ahamed Hafiz, a maize, rice and soyabean farmer from Wuba community, said the soyabean had grown well on the field, which showed that the technology was good.

Alhassan Gazale, a maize, groundnut and soyabean farmer from Kpalsogu community, said the seeds had grown well and they showed bigger grains, which were good for us.