EU charges Nigerian youths to participate actively in the 2023 elections 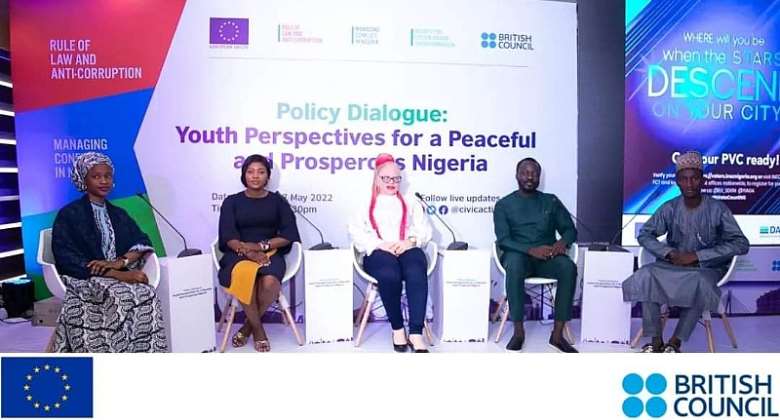 The European Union has urged Nigerian youths to go beyond obtaining their voter's cards to participate actively in the upcoming 2023 general elections and ensure that they influence the outcome.

The head of the European Union (EU) delegation to Nigeria and the Economic Community of West African States (ECOWAS), Ambassador Samuela Isopi described the 2023 polls as a critical time for young people in the country as it presents another opportunity for youths to be part of the decision making process.

Isopi who was represented by Winifred Achu spoke at a policy dialogue themed " youths perspective for building and sustaining a prosperous Nigeria" organised by the Agents for Citizen-driven Transformation (ACT), Managing Conflict in Nigeria (MCN) and Rule of Law and Anti-Corruption (RoLAC) Programmes funded by the European Union and facilitated by the British Council in Abuja on Tuesday.

The Ambassador noted that youths make up 65 percent of Nigeria's total population, and 50 percent of registered voters. “Now is the time for youths to influence the outcome of the 2023 elections for their benefit and their country at large. Today is the tomorrow our leaders have always spoken about when we say that youths are the future of tomorrow. The timing for this dialogue could not have been better, as Nigeria prepares for 2023general elections, we are at a critical point for young people in Nigeria," she added.

National chairman inter party advisory Council, Yabagi Yusuf Sani, in his remarks said youths must not sit and wait for power to be handed to them, hence they have to earn it by participating actively and meaningfully in political processes.

"Power isn't given on a platter of gold, you have to work for it, you have to earn it. There is no free lunch, nobody will give it to you. The grim statistics on poor participation cannot change unless youths change it," he stressed.

"If you youths are mainstreamed in the politics of Nigeria, I'm sure the economy of Nigeria will be much better than it is today, which is what is responsible for the huge unemployment population that we have. But all hope is not lost, we now have a new opportunity to change the scenario and they are very much aware of that, they are the largest population of the voting community," he added.

He further urged youths to ensure that they shun violence and refuse to be lured by money.

A representative from the centre for environmental sustainability and development awareness (CESDA) Ibrahim Faruk noted that by 2030, Nigeria's greatest resource would not be oil, but her young population. He however decried that there is still a huge gap in terms of youth inclusion and representation despite available policies and laws.

According to him, in 2019, Nigeria only had 0.06 per cent of youth representation. Faruk, however, said that the 2023 polls are another opportunity. "Participation goes beyond coming out to vote every once a year, it involves the decision-making process. The concept of associating age with wisdom should stop because young people are also creative and innovative," he said and warned that youths find other ways to express themselves when denied the opportunity.

Also speaking, Constance Onyemachi, a representative of women and girls with an albinism network, also decried that 27 million persons living with disability are still marginalised and suffer discrimination despite laws in the country.

"27 million persons with disability is a huge number to be excluded, they have continued to face discrimination especially when it comes to participation in the electoral process. Women with disabilities face double jeopardy as they are seen as people who are not capable of holding political offices," she cried.

Onyemachi, therefore, urged the INEC and all stakeholders involved in the election to take into consideration the specific needs of different persons with disability so that they are not left out in the process.

He added that they are set to organise a policy dialogue to gather youth perspectives for building and sustaining a peaceful and prosperous Nigeria.

Oluwatoyosi Giwa, Component Manager, Civil Society Engagement explained that the dialogue aims to provide a platform for young Nigerians with whom MCN, ACT and RoLAC have engaged across conflict management, civil society strengthening and justice reform interventions, to share their perspectives on critical issues that should inform the government’s policy agenda, in the lead up to the 2023 Nigeria elections.