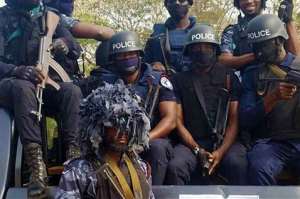 The Ghana Police Service has announced that its officers are in control of issues in Nkoranza following the recent clashes with angry youth of the area.

In a press release signed by DCOP Kwesi Ofori, the Police says through its efforts, law and order have been restored as residents go about their normal daily routines.

“The Police Service continues to be in firm control of the situation at Nkoranza and its environs where peace, law, and order have been restored and residents are going about their socio-economic activities without fear or hindrance,” part of the Police press release reads.

According to the Police, the Service is satisfied with the strategic operational contingency plan and the general deployment of Police personnel on the ground in handling the situation.

The number of persons affected by the attacks, according to the medical authorities at St Theresa's Hospital is now eight.

Out of the number, one person died while receiving treatment, two have been treated and discharged while the remaining five (5) are still on admission and in stable condition.

On the instructions of the Inspector-General of Police (IGP), a high profile team, led by the Director-General/Administration, Commissioner of Police (COP) Mr. Christian Tetteh Yohonu, arrived at Nkoranza today, Wednesday, May 18, 2022.

The team is to provide strategic leadership for the ongoing operations and will remain on the grounds for as long as necessary.

Meanwhile, through a targeted intelligence-led operation, the Police have re-arrested one murder suspect who was among those who had escaped from lawful custody.

Also, three additional persons have been arrested in connection with the disturbances bringing the total number of arrested persons to five.

The Police say it is pursuing the other suspects involved in this dastardly attack on Police facilities to bring them to book.

The service is assuring the general public that it will do everything to get the suspects arrested.