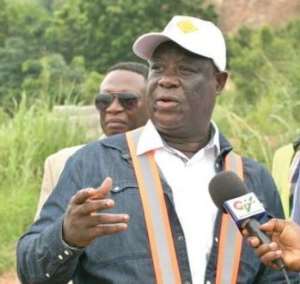 Mr Kwasi Amoako-Atta, Minister of Roads and Highways, has assured the contractor working on the Afienya-Dawhenya road project in the Ningo-Prampram District of government's support to ensure its completion.

The road, which serves the two adjoining communities, Afienya and Dawhenya, as well as surrounding towns, have been in a deplorable state for many years.

This has led to agitations from residents of the two communities who said the situation was taking a toll on economic activities in the area and endangering lives.

In July 2021, construction work on the road resumed following the awarding of the project to a construction firm, CYMAIN Limited, by Government.

Speaking in an interview with the media after touring the project site, and some roads in the district, Mr Amoako-Atta said the Government was committed to ensuring the completion of the project, to ease the plight of the residents and boost economic activity.

He explained that the Government considered the road as a very strategic one, which when completed would serve as an alternative to drivers and ease traffic on the Aflao road.

During a visit to the site, the Ghana News Agency observed that construction of major drains was progressing in earnest, while surface of the main road had also received a facelift, even though not tarred.

The Minister commended the contractor for the work done so far and assured of Government's unflinching support to ensure that the project was completed on schedule.

“I must put it on record that I am impressed about the work going on and the quality of it. You saw the drains and I also realised that he has taken steps to work on the road to give it a smooth driving surface whiles working on the drains,” he said.

He added that: “I know within a year or less the people here will see a very significant work on that road.”

The Minister was accompanied by Madam Mavis Nkansah Boadu, a Deputy Minister of Roads and Highways, Mr Samuel Nartey George, Member of Parliament for Ningo-Prampram and Alhaji Abass Awolu, Chief Director of the Ministry.

The tour was to afford the Minister the opportunity to obtain first-hand information about the progress of work on the project.

The Minister also paid a working visit to the Axel Weighing Station in Afienya, where he disclosed that plans were advanced to relocate the centre to a more convenient location to enable it to carry out its operations.

He bemoaned the lack of adherence to the country's axel loading control laws by drivers, a situation he said was causing damage to major roads in the country.

“So, upon technical advice from my engineers, it must be relocated. We have found a suitable place and I have given the go ahead that the Ghana Highway Authority should take the steps for the relocation, and I hope that, it will be done as quickly as practicable,” Mr Amoako-Atta said.