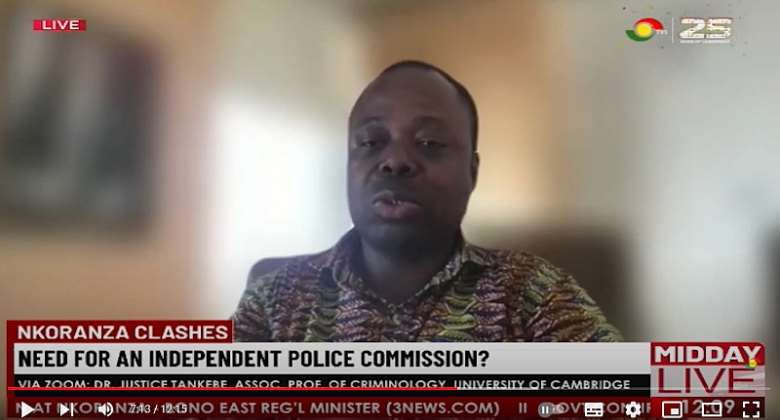 A Criminologist at the University of Cambridge, Professor Justice Tankebe, has said the narrative by the Police following the murder of the 27-year-old Albert Donkor who reportedly died in Police custody at Nkoranza in the Bono East region, cannot be accepted.

He explained that a lot of times, during deadly upheavals like what is happening in Nkoranza, the Police would explain that they acted on the basis of intelligence they had gathered, a narrative he notes, is always accepted on its face value.

This time round, he said the statement of the Police cannot just be consumed as the gospel truth.

The Police Professional Standards Bureau (PPSB) of the Ghana Police Service took over investigations of what what they described as death of a robbery suspect at Nkoranza.

Hottest Photo Reports
Catch up with all the political quotes from our politicians.
Advertise here
More from Social News
ModernGhana Links
Financial transactions will be allowed even without Ghana card – GAB assures
Takoradi woman insists she was pregnant
Be vigilant amidst current terror threats – CDS to Army
TOP STORIES

Ghana’s problem is pomposity, deception, lack of sincerity b...
32 minutes ago

Financial transactions will be allowed even without Ghana ca...
50 minutes ago