Probes into anti-France demo deaths in Niger say cause unclear 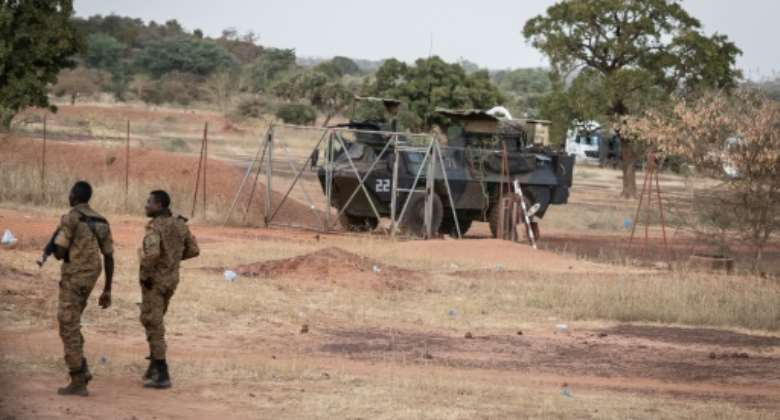 The French convoy parked in Kaya in central Burkina Faso after being attacked by demonstrators -- it then crossed into Niger, where deadly protests erupted. By OLYMPIA DE MAISMONT (AFP)

Investigations into the death of three people killed last November during a protest against a French military convoy travelling through Niger have failed to pinpoint the cause, the government said.

The convoy was on a marathon trip to resupply French troops in Mali when it was first stopped and stoned by demonstrators in Kaya in the centre of Burkina Faso.

The convoy then crossed into Niger but was blocked again in Tera in the west of the country, where three people were killed in shooting blamed on Nigerien or French troops.

In December, Nigerien President Mohamed Bazoum ordered an inquiry and called on France to do the same.

"The results of the investigations by the Niger gendarmerie and the French army having been unable to determine the precise sequence of events which led to deaths and injuries among the demonstrators. Niger and France have decided to jointly compensate families of the victims and the wounded," the Nigerien interior ministry said.

The two countries will "equally share" compensation, it said in a statement late Tuesday that did not give figures.

The Nigerien probe "revealed serious deficiencies with regard to the arrangements anticipated (by Niger) for maintaining order to manage the situation," it said.

This "caused the French army to turn to the use of force to extricate itself from the pressure of the demonstrators".

"Meanwhile, the investigation carried out by the French army, while acknowledging that the convoy used force to extricate itself from the threatening crowd, concluded that the situation unfolded in line with regulations, using warning shots," it said.

In addition to the three protestors who were killed, 17 civilians, seven Nigerien gendarmes and seven French soldiers were wounded, it said.

The convoy, which had begun its journey in Ivory Coast, took place at a time when France was facing mounting hostility in Mali.

The Nigerien statement said the protest in Tera had been organised.

The demonstration "was far from being a spontaneous event", it said, adding that most of those involved were school pupils.

In an interview published Wednesday with two French media outlets, Bazoum said he was dissatisfied with the French investigation.

"It consisted of saying that the French army had proceeded to make warnings using lethal weapons. It concluded that its soldiers hadn't killed," Bazoum told La Croix daily and L'Obs magazine.

"It's probably the lethal means used by the French army to make warnings that resulted in hitting a certain number of demonstrators and killed three of them, children," he said.

But, he added, "If France has a share of responsibility, Niger does too.

"We deployed forces to maintain order and they were not effective. The French had to extricate themselves, and they had to use lethal means (to do so), which led to deaths."

Bazoum replaced the interior minister and head of the gendarmerie after the incidents.

Thousands of people have died and more than two million have fled their homes in Mali, Niger and Burkina Faso since Islamist extremists launched an insurgency in northern Mali a decade ago, shaking the fragile Sahel region.

France has deployed thousands of troops to the three countries, all former colonies, to try to stem the assault.

But its forces are pulling out of Mali, leading to a revamp of the mission, after France and the ruling military junta in Bamako fell out.

France has long had close ties with Niger and has an important air base near the capital Niamey, although the incident surrounding the convoy stoked tension.

Niger is the poorest country in the world according to the benchmark of the UN's Human Development Index (HDI).

The landlocked state is facing jihadist attacks on two fronts.