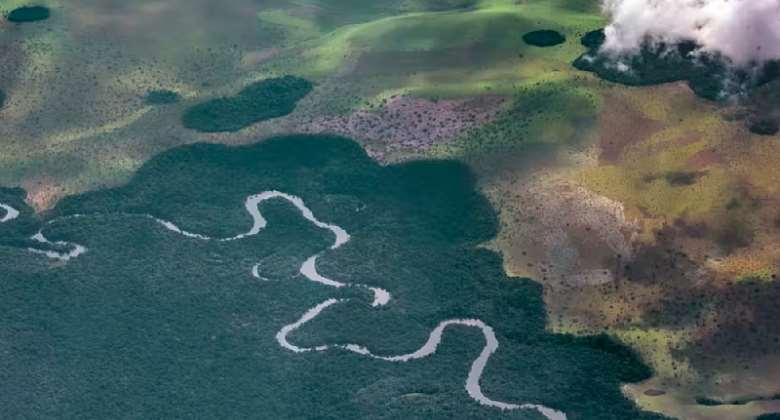 The rainforests of the Congo Basin in Central Africa are sometimes called the Earth's second lung after Lamp;39;Amazon because of their ability to store carbon. - Source: Guenterguni via Getty Images

The African continent is only responsible for 2% to 3% of global carbon dioxide emissions from energy and industrial sources. But it is suffering alarmingly from the effects of the climate crisis, as reports from the UN and other organizations show. On the positive side, Africa has enormous potential to mitigate the effects of climate change, in particular thanks to its tropical rainforests.

The rainforests of the Congo Basin in Central Africa are sometimes called the Earth's second lung (after the Amazon) because of their ability to store carbon. In addition to the forest trees, the basin is home to the world's largest tropical peatlands, discovered in 2017. Scientists estimate that these peatlands store carbon worth about 20 years worth of fossil fuel emissions from the United States . The Congo Basin is also rich in biodiversity and minerals.

As long as this rich and strategically important region is not destroyed, Africa can contribute to the fight against global climate change.

The rainforests and people of the Congo Basin are seriously threatened by global climate change and other human factors. Commercial logging, mining, extensive agriculture, infrastructure development, rapid urbanization, energy consumption and transnational wildlife poaching are among them.

The neglected role of the humanities and social sciences

Academics and policy makers tend to view the pure sciences as the only disciplines capable of offering solutions to ecological challenges. They sometimes overlook the role of the social sciences and humanities, including the arts and literature, in addressing climate change and environmental issues.

But that is changing, thanks to emerging interdisciplinary fields, such as the environmental humanities. They use sources such as literary and artistic texts. This field also borrows methods from disciplines such as communication, history, philosophy, political science, sociology and anthropology.

My recent doctoral thesis argues that literary texts and critical studies of these texts have a role to play in saving the Congo Basin.

Drawing on postcolonial ecocriticism and environmental literary activism, I examined a selection of novels, plays, and poems by Congo Basin writers.

Their lyrics portray or condemn climate and environmental issues such as deforestation, youth climate activism, wildlife poaching, freshwater pollution, and unplanned urbanization. They also question practices such as environmental injustice and violations of the rights of local and indigenous populations. In short, literary texts portray climate and ecological issues in ways that make them more palpable and accessible.

I suggest that literature can serve as a call to climate action. It can show how individuals, communities and institutions are contributing to, mitigating or adapting to climate change, biodiversity loss and environmental degradation. Literary texts are useful for environmental communication and have the ability to represent complexity.

The authors whose works I have studied are:

I analyzed the way in which their texts depict the climatic and ecological problems of the Congo Basin and provide elements of response.

For example, the novels Cheval-roi by Effa, Temps de chien by Nganang, and The Buffalo Rider by Nsahlai depict the relationship between humans and animals. The novels Congo Inc: The Testament of Bismarck by Bofane, The Silence of the Forest by Goyémidé and The Merchants of Sustainable Development by Ndinga promote the indigenous knowledge systems and practices of the Babinga and Ekonda peoples. They question the harmful aspects of neoliberal capitalism, globalization and sustainable development. Theater plays like Water Na Life by Inyang and Le Mal de terreof Djombo deal respectively with the pollution of fresh water and disorderly urbanization.

Literary texts can contribute in many ways to solving these problems. They can raise awareness of ecological issues and promote communication on various environmental problems.

One of the environmental problems of the Congo Basin is deforestation and its consequences for humans and nature. In 2020, increasing rates of primary forest loss were reported in the Congo Basin, with the Democratic Republic of Congo and Cameroon topping the charts. This question is analyzed in plays such as The Hill Barbers by Ekpe Inyang and Le Cri de la forêt by Henri Djombo and Osée Koagne. These pieces identify the causes of deforestation and suggest ways to stop it.

Literature can also motivate people to tackle climate change and amplify the work of activists. I argue that Congo Basin writers such as Inyang, Djombo, Koagne and Origo predicted the emergence of global youth climate activism. This activism is exemplified by Swedish Greta Thunberg, Ugandan Vanessa Nakate and DR-Congolese Remy Zahiga, among others.

These authors represent young African characters, like the child volunteers in the play Les Bénévoles de Djombo, who fight against climate change and environmental crimes. Literature is therefore both a source of inspiration and a means of communication for youth climate activism in the Congo Basin and far beyond.

Celebrating the connection between humans and nature

Literary texts also remind humans of their relationship with the rest of nature, including animals, rivers, and the land. Novels such as those by Nsahlai, Effa, and Nganang illustrate the entanglements between human and animal. Plays such as Water Na Life and Le Mal de terre highlight the entanglements of man-water and man-earth. They show how bad governance and ignorance of the links between humans and nature lead to ecological problems.

Literary texts not only highlight the violations of human rights and the rights of nature, but they also describe the consequences of these violations.

We can cite this colonial and racist idea of ​​an Edenic Africa: an imaginary African nature virgin and rid of any human presence. It is an idea that fuels green colonialism in Africa. And it underpins the much-contested model of fortress conservation in the Congo Basin. Fortress conservation involves driving people out of their ancestral forests in the name of nature conservation.

If myths such as the Edenic Africa are identified and eliminated, conservationists can be more inclusive and respectful of local and indigenous peoples and their knowledge systems. Novels such as Congo Inc. by Bofane, Le Silence de la forêt by Goyémidé and Les Marchands du développement durable by Ndinga are useful in this regard. They highlight the knowledge and practices of people who have inhabited the forests of the Congo Basin since time immemorial.

The global climate and environmental crisis is not just a crisis of capitalism and industrialization. It is also a cultural crisis.

This is why we must get rid of cultural metaphors and philosophical ideas such as the separation between humans and nature. These ideas have long encouraged the domination and exploitation of nature and animals by humans.

Through film, music, and literature, humans have come to construct an image of themselves as different and superior to the rest of nature. But literature can also celebrate the entanglements between humans and nature and draw inspiration from cultures such as those of the Congo Basin.

Very significantly, literature offers considerable means to communicate on complex issues such as the current global climate emergency. Literature can therefore contribute, in addition to other academic disciplines and efforts - political, scientific and technological - to protect the biodiversity and the populations of the Congo Basin.

Kenneth Toah Nsah does not work for, consult, own shares in or receive funding from any company or organization that would benefit from this article, and has disclosed no relevant affiliations beyond their academic appointment.

Latest Photo Reports
Catch up with all the political quotes from our politicians.
Advertise here
More from Article
ModernGhana Links
Why Kenya’s experiment in giving local governments the power to manage food security hasn't worked
How beetles trick bees into feeding them food rich in nutrients
Why the South African state should not subsidise minibus taxi owners
TOP STORIES