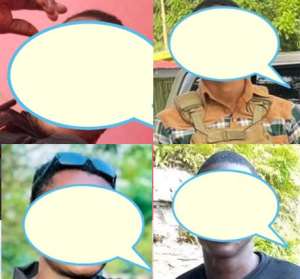 Two more persons have been arrested and dragged before an Accra Circuit Court for their alleged involvement in a number of bullion van robberies in the capital.

G/Const. Nelson Tetteh, a police officer and Buba Zakari aka Rasta, a motorbike mechanic have been charged with abetment of robbery, bringing the number of persons standing trial for the alleged robberies to six.

In all, Constable Yaro Afisu Ibrahim, Constable Albert Ofosu aka Cypher, Constable Richard Boadu aka Osor and Constable Rabiu Jambedu together with new accused persons are facing two counts of attempt to commit robbery and abetment of robbery, to which they all pleaded not guilty.

Court papers say the accused persons, on February 22, 2022, armed with AK47 assault rifles attacked and fired at a bullion van with registration number GN 424-14 at North Kaneshie, in an attempt to steal an unspecified amount of money belonging to Mon-Tran Ghana Ltd.

Justin Pwavra Teriwaja, counsel for Constable Yaro Afisu Ibrahim, in his application urged the court not to use the severity of the punishment as ground for refusal of bail pending trial.

He said his client is a serving police officer with a fixed place abode, and satisfies all the requirements in Section 96 of Act 30 to be granted bail.

David Bondori, counsel for Constable Albert Ofosu, on his part told the court that the accused has a fixed place of abode and people of substance who are willing to stand sureties for him.

Divine Dotse Tettey, counsel for Constable Richard Boadu, said the accused were first arraigned on March 9, 2022, and the prosecution has since not filed any disclosures, adding that the prosecution is unreasonably delaying the trial hence the need for the accused to be granted bail.

Jango Nuhu, counsel for Constable Rabiu Jambedu, said his client is not a flight risk while Andrew Vortia, counsel for G/Const. Nelson Tetteh and Buba Zakari told the court that the charges levelled against his clients are bailable, and assured that the accused will avail themselves for the trial.

The application was opposed by the prosecution led by DSP Sylvester Asare, who argued that the accused ought to be remanded for the public interest.

He said the accused persons are flight risk and will not show up for the trial when granted bail, adding that the accused are recruit constables who are yet to complete their 18 month mandatory probation.

He added that the accused persons were given special training with the public purse to protect the public and not to harm the public, as has occurred in this case.

The court, presided over by Her Honour Evelyn Asamoah, in her ruling stated that considering the nature of the offence and severity of the punishment, the accused are remanded to reappear on June 2. She ordered the prosecution to file their disclosures by May 30.

The brief facts of the case indicate that on February 22, 2022, the police received a report that some armed robbers had attacked a bullion van with registration number GN 424-14 at North Kaneshie, Accra.

According to DSP Asare, police investigations led to the arrest of Const. Reindolph Gyima Ansah alias Pablo and Lance Corporal Stephen Nyame (both deceased), who both admitted the offence and mentioned the four and others at large as their accomplices.

He added that preliminary investigations disclosed that the accused persons were friends and recruit mates at the Police Training School, and together with the deceased officers after their basic training were posted to the National SWAT unit where they underwent various tactical and specialised weapon training to equip them for functions including the escort of bullion vans.

The facts say the two motorbikes that were used for the robbery were supplied by Const. Nelson Tetteh and Buba Zakari while Yaro Afisu Ibrahim, Constable Albert Ofosu, were those who fired the guns while on the motorbike.