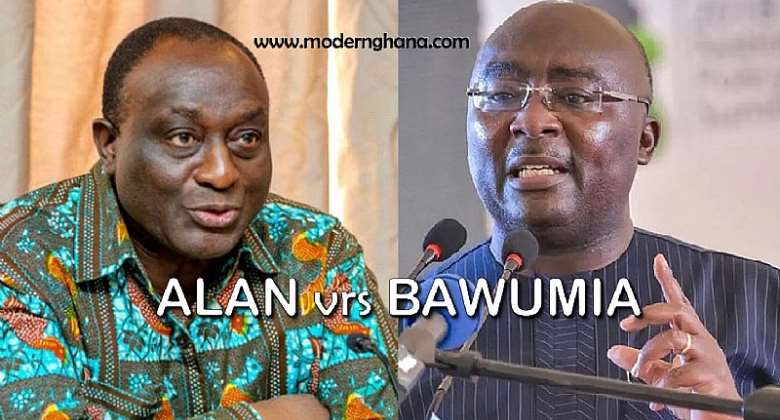 We have heard the kind of “compromise talk” that Nana Akomea, Managing -Director of the State Transport Company (STC) and former Communications Director of the presently ruling New Patriotic Party (NPP), has been widely reported to be selling the party’s kingmakers in the leadup to the 2024 General Election. Which is that in the highly likely event of Vice-President Mahamudu Bawumia’s emerging as the party’s Presidential Nominee and Candidate for the 2024 Presidential Election, infamous party deserter and cold-calculating quitter, Mr. Alan John Kwadwo Kyerematen, the dynastic and, I guess, compromise Trade and Industry Minister in the governments of both Presidents John Agyekum-Kufuor and Addo Dankwa Akufo-Addo, should automatically be crowned as the Vice-Presidential Candidate and the Running-Mate of the presumptive 2024 New Patriotic Party Presidential Candidate (See “Why Bawumia-Alan Ticket? – Mpiani Tackles Akomea’s Proposal” Ghanaweb.com 4/27/22).

Now, if Mr. Kwabena Agyei Agyepong really wants to know what a “coronation” is and who are really mischievously scheming for the coronation of a person who has done more to undermine the chances of the New Patriotic Party at an electoral victory in the past dozen-and-odd years than any other putative key player of the NPP, here is the picture that I have for the sometime Press Secretary of former President Agyekum-Kufuor. We shall shortly tackle the question of who is really scheming for a coronation while vehemently pretending to abhor the same. But for now, what is more important to highlight is the inescapable fact that such talk comes exactly on the 50th anniversary or a half-century after the seismic passing of Ghana’s first postcolonial leader, President Kwame Nkrumah, which makes such discussion all the more captivating and politically relevant, if also because it critically underscores the fact that as a major political party and ideological establishment, the New Patriotic Party, which proudly claims to have been spiritually and ideologically informed and strategically inspired by Dr. JB Danquah and Prime Minister KA Busia, as well as Mr. SD Dombo, is still pretty much the veritable prisoner of Ethnic or Tribal Nationalism and not necessarily a Neoliberal Free-Market ideological citadel.

Fundamentally speaking, but for the inimitably progressive and visionary national development policy initiatives implemented by President Addo Dankwa Akufo-Addo, there would be absolutely no difference in government or governance between Ghana’s two major political parties, namely, the ruling New Patriotic Party and the country’s main opposition National Democratic Congress (NDC). Both parties, for the most part, are led by pathological and megalomaniacal kleptocrats who have scandalously demonstrated that Ghanaians would be much better off importing a totally new team of leaders and rulers from outer space. Now, it goes absolutely without gainsaying the fact that Mr. Kwadwo Mpiani’s vehement protestation against Nana Akomea’s proposal that Vice-President Bawumia be paired up with Mr. Kyerematen, with the latter serving in the undeserved capacity of the Runnung-Mate of the former, is inescapably predicated on a brazen Asante nationalist pathology and not the proven performance track-record of the candidate of Mr. Mpiani, President Agyekum-Kufuor’s clansman and political and ideological right-hand man and former Chief-of-Staff to the former President, whose extremely snail-paced approach to national development earned the Atwima-Nwabiagya native the sobriquet of “Medofo a Daadaa Me,” roughly translated into the English language as “My Beloved Has Royally Disappointed Me.”

For staunch members, supporters and sympathizers of the New Patriotic Party, on the one hand, and all well-meaning and progressive-thinking Ghanaians, on the other hand, to fully appreciate why it is wrongheaded for both Messrs. Mpiani and Akomea to factor the Trade and Industry Minister into the party’s leadership equation, going into the 2024 General Election, we need to go back to the watershed moment and year of 2008 and the politically regressive contribution of the Kufuor-Mpiani-Kyerematen Faction of the New Patriotic Party to the socioeconomic underdevelopment of the Sovereign Democratic Republic of Ghana, both by a sheer act of default and deliberate strategizing or, rather, scheming primarily geared towards the effective sabotaging and the preemptive evisceration of any possibility of the actualization of an Akufo-Addo Presidency.

Ironically, however, but for the auspicious accession of Nana Addo Dankwa Akufo-Addo to the Presidency, there would be very little left, by way of bragging rights, of the inescapably significant achievements of the Agyekum-Kufuor-led government of the New Patriotic Party (2001-2009), from the fiscally wasteful but absolutely necessary resuscitation of the effectively bungled and thoroughly bankrupted National Health Insurance Scheme (NHIS), Mr. Agyekum-Kufuor’s flagship social-intervention program, as well as other equally significant national-development programs such as aid to the superannuated and the most vulnerable Ghanaian citizens, professional-training allowances, a long-established program dating from the very postcolonial foundations of our beloved nation, and dozens of others that time does not permit yours truly to either adequately or exhaustively delve into.

Now, what is most important to consider heading into the 2024 General Election regards which of our Presidential Candidates or prospective Presidential candidates has established an enviable track-record of jealously protecting the interests and aspirations of the most vulnerable citizens in Ghanaian society, especially our able-bodied and talented youths who, but for the timely implementation of the landmark Fee-Free Senior High School System by President Akufo-Addo, would have absolutely no chance for the development of meaningful future careers and vocations to think and talk about. That Alt-Right Asante Nationalists like Profs. Ivan Addae-Mensah and Stephen Adei continue to vehemently and cynically rail against the fiscal expenditures involved in the critical and necessary implementation of the Fee-Free Senior High School System, rather than its quality and long-term contribution to the development of our country as a whole, ought to seriously and soberly inform Ghanaians about the dangers of ethnic and subethnic chauvinism, cynicism and the crassly deliberate and negative weaponization of a taxpayer-underwritten privileged and prestigious education to effectively and opportunistically sabotage relative latecomers on the scene who are even more direly in need of the same.