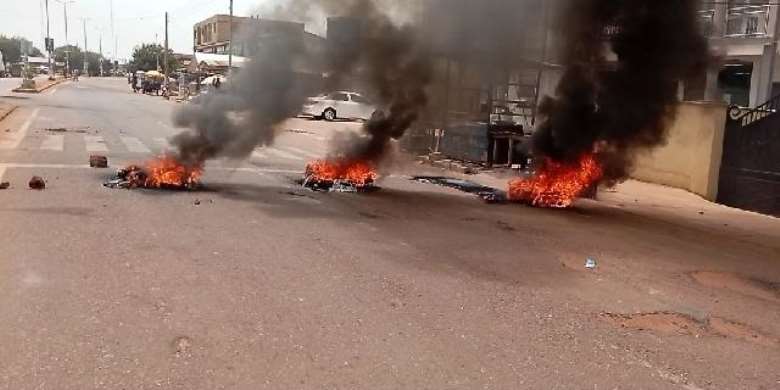 Two people have been arrested following an attack by the angry youth of Nkoranza in the Bono East Region on the Nkoranza Police Divisional and District Headquarters.

Some irate youth on Tuesday, May 17, 2022, stormed the Police Stations reportedly in a bid to free some suspects picked up in connection with the death of Albert Donkor, an armed robbery suspect who died during a police anti-robbery operation.

The Police in its efforts to fend off the unlawful advances of the youth called for reinforcements from the Regional Headquarters to restore calm.

Six of the suspects in Police custody managed to escape while one of the youths was shot dead.

Meanwhile, reports indicate that all six of the suspects that escaped from Police custody have been rearrested.

Amid the tension in Nkoranza, the Ghana Police Service has issued a press release calling on the youth to be calm.

The Police further urge the general public to avoid unfounded speculations about the death of Albert Donkor.

“In view of the PPSB investigation, we urge the public to avoid unfounded speculations which have the potential to prejudice the outcome of the ongoing investigation.

“We wish to assure the good people of Ghana that we are committed to ensuring the safety and security of all and we urge you to support us in the fight against violent crimes in the country,” parts of the Police press release have said.