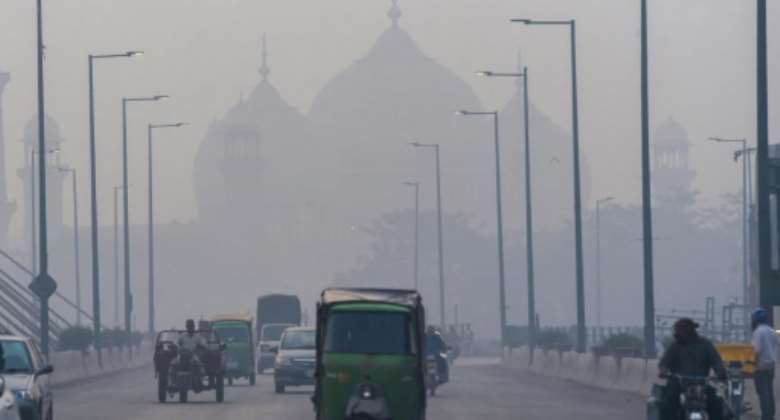 Outside air pollution is a growing threat. By Arif ALI (AFP/File)

Pollution caused some 9 million people to die prematurely in 2019, according to a new global report published Wednesday, with experts raising alarm over increasing deaths from breathing outside air and the "horrifying" toll of lead poisoning.

The Lancet Commission on pollution and health said the impact from pollution on global health remains "much greater than that of war, terrorism, malaria, HIV, tuberculosis, drugs and alcohol".

Pollution is an "existential threat to human health and planetary health, and jeopardises the sustainability of modern societies," it added.

In general, the review found, air pollution -- accounting for a total of 6.7 million deaths globally in 2019 -- was "entwined" with climate change because the main source of both problems is burning fossil fuels and biofuels.

"If we can't manage to grow in a clean and green way, we're doing something terribly wrong," said the report's lead author Richard Fuller, of the Global Alliance on Health and Pollution, adding that chemical pollution also harms biodiversity -- another major global threat.

"These things are terribly connected and strategies to deal with one have ripple effects all the way through," he said.

Overall, one in six premature deaths globally -- or nine million -- were caused by pollution, a figure unchanged since the last assessment in 2015.

Researchers said the causes of particularly air pollution are largely the same as those driving climate change. By Nikolay DOYCHINOV (AFP/File)

But early deaths associated with industrialisation -- outdoor air and chemical pollution -- are on the rise, particularly in southern and eastern Asia.

Ambient air pollution caused some 4.5 million deaths in 2019, according to the study, published in Lancet Planetary Health, compared with 4.2 million in 2015 and just 2.9 million in 2000.

Chemical pollution is also increasing, with lead poisoning alone causing 900,000 deaths. Even that, the report warned, is likely a "substantial undercount" in light of new research suggesting there is no safe level of exposure.

Algeria banned lead in petrol in 2021, the last country to do so.

But people continue to be exposed to the toxic substance, largely due to unregulated recycling of lead-acid batteries and e-waste. Contaminated culinary spices are also a culprit.

"The fact that lead is getting worse, mostly in poorer countries, and ramping up in terms of the number of deaths, is horrifying," said Fuller.

Heart disease is the cause of almost all early deaths from exposure to lead, which hardens arteries, said Fuller.

Improvements in indoor air and water pollution have been off set by increasing industrial pollution. By JOHN WESSELS (AFP/File)

But elevated lead levels in blood -- estimated to affect hundreds of millions of children -- also harm brain development and are linked to serious losses of cognitive function.

The report said lead is also linked to a spike in behavioural disorders and diminished economic productivity, with global economic losses estimated at almost $1 trillion annually.

In Africa, economic losses from lead-related IQ loss are equivalent to about four percent of gross domestic product, while in Asia it amounts to two percent.

Overall, excess deaths due to pollution have led to economic losses totalling $4.6 trillion in 2019, or around six percent of global economic output, researchers said.

Low- and middle-income countries are by far the most affected, with more than 90 percent of deaths in these regions.

There is also increasing evidence of pollution crossing national boundaries in wind, water and the food chain.

Wealthier nations that have reduced domestic outdoor air pollution effectively "displace" it overseas to countries with higher levels of manufacturing, the report said.

Prevailing global winds transport air pollution from east Asia to North America, from North America to Europe, and from Europe to the Arctic and central Asia.

Meanwhile, cereals, seafood, chocolate and vegetables produced for export in developing countries can be contaminated as a result of soil and water polluted with lead, arsenic, cadmium, mercury and pesticides.

Fuller said the threat of pollution -- particularly air and lead pollution -- is underappreciated, with more attention focused on the health implications of microplastics.