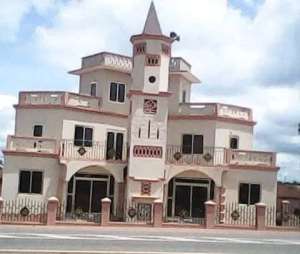 In a press release issued on 11th May, 2022 by a youth group calling itself Nkenkanso Royals Association International, they accused Kingmakers in the community for relenting on efforts to install a chief after the demise of former chief Nana Asare Kume II 19 years ago which has affected development drive of the town.

They also accused their Member of Parliament, Hon. Augustine Collins Ntim and District Chief Executive, Hon. David Asare Boakye of doing nothing leading to the deteriorating nature of the Nkenkanso community.

Speaking on the CruzFm morning show, lead convenor of the group, Mr. Kwame Ntim Katakyie lamented the deplorable nature of the town brought is as a result of chieftaincy disputes that erupted in their community about two decades ago.

They have called on the Kingmakers of the community to as a matter of urgency select and install a substantive chief immediately to pave way for development to thrive.

They have again tasked DCE, David Akwasi Asare Boakye to live up to the task by fulfilling promises prior to his confirmation for his second term to fix sanitation, infrastructural and roads challenges confronting the community

Below is full version of the release:

We have witnessed leadership divisiveness since then, which the good people of Nkenkaasu are now facing the consequences. We have been quiet for sometime now because we were of the view that after private, respectful and diplomatic engagement with stakeholders, things would get resolved. It seems to us that if our displeasure is not expressed in this manner, things will get out of hand as far as development deficiency is concerned.

We as residents appreciate what Obaa Hemaa Nana Yaa Pokua and other sub-chiefs have done since power was conferred on her by the occupant of Asante Golden Stool, Otumfour Osei Tutu II eighteen years ago. She has played her part but two heads are better than one (Ti Kor) nko agyena).

The people of Nkenkaasu have been yearning for a leader (Chief) for about twenty years. This great community has been without a chief since the demise of Nana Asare Kumi II (The late Chief of the community). As a result of this unfortunate situation, the community is getting worse each day. The state of Nkenkaasu Wednesday Market is an eyesore. The deplorable state of this once enviable market within Offinsoman is demeaning, unfortunate and shameful for a town that once boasted of the only government hospital on the Kumasi-Kintampo stretch.

Sanitation issues are a torn in the flesh as waste disposal and management are quite challenging in the community. Places of convenience are in deplorable states. Our town roads have been left in limbo. Some of the place have become breeding grounds for mosquitoes, which pose health threat to our people. Nkenkaasu Government Hospital in it's current state has no x-ray machine which is quite disheartening! Minor problems that could have been ordinarily handled by this facility are referred to either Holy Family Hospital at Techiman or St. Patrick's Hospital at Offinso. The state of the newly built Nkenkaasu Police station has been left midway.

We are reminding the DCE., Hon. David Akwasi Asare to live up to task, on the promises he made before his second term of appointment. Some of our youth have engaged themselves in acts that are inimical to decent social life such as drugs, alcoholism among others. Our hearts are bleeding because things have fallen apart. By this press release, we the people of Nkenkaasu are demanding that a chief be installed immediately! The kingmakers are respectfully being called upon to give us a leader.

Nothing more, nothing less, nothing else! We are using the medium to call on the Member of Parliament who also doubles as the Deputy Minister of Local Government, Decentralization and Rural Development, Hon. Augustine Collins Ntim to wake up to get the community working.

We, Nkenkaasu Royals Association International would want to state categorically without qualms or reservations that we are not motivated by any group, persons or ill motive in this release.

We are motivated by our collective conscience, deep sense of patriotism and our responsibility to make Nkenkaasu a better place. We are encouraged and emboldened by a formidable statement penned by one of the finest presidents United States of America has ever produced, Theodore Roosevelt: Whatever you do, you need courage. Whatever course you decide upon, there is always someone to tell you, you are wrong.

There are always difficulties arising which tempt you to believe that your critics are right. To map out a course of action and follow it to the end requires some of the same courage which a soldier needs. Peace has its victories but it takes brave men and women, emphasis ours) to win them.Nkenkaasu Royals, Mpuntuo Nti!Nkenkaasu Royals, Nk)so)!!