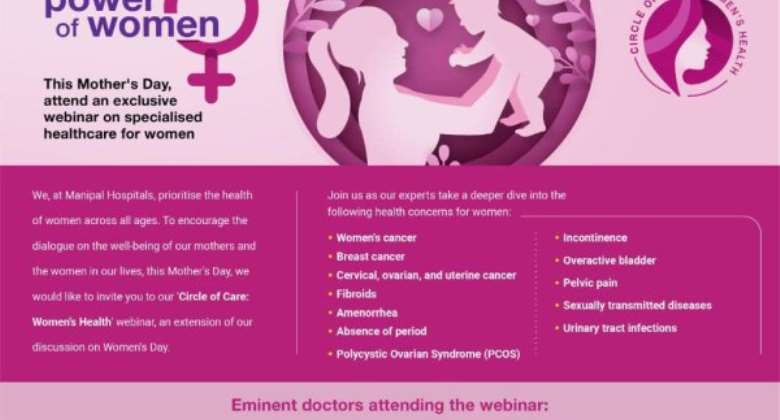 Research indicates that 35 per cent of breast and cervical cancers, leading causes of death in women can be prevented through proper diet, Dr Rohit Kumar C, a Surgical Oncology Consultant at Manipal Hospitals, has said.

He said according to data, while improper diet contributed to 35 per cent, of cancer cases, tobacco represented 30 per cent, sunlight 10 per cent, other causes occupying 10 per cent, viruses seven per cent, occupational factors four per cent, alcohol three per cent and radiation one.

Dr Rohit made the call during a webinar organised by Manipal Hospitals on specialised healthcare for women on the theme: “Circle of Care: Women &Health.”

It is, thus, important for women to eat healthy, engage in physical activity, relax, and have enough sleep to help prevent diseases.

He noted that, “it is important to us at Manipal Hospitals to promote healthcare and not sick care because, we want people to understand their healthcare and take their wellbeing into their own hands”, he stated.

He noted that promoting healthcare had become necessary as people were spending nearly 88 per cent of their money on medical services whereas 50 per cent of what makes them healthy lies in their hands.

Dr Rohit educating participants on the various forms of breast and cervical cancers called for regular checks for early detection and treatment saying, “Five minutes of your time for breast examination or pap smear for cervical cancer would allow one to be at peace for five years”.

The webinar featured prominent panelists who spoke about women's health and their well-being.

It further discussed that, despite increased awareness of women's rights in all aspects of life, many people were still uninformed of the importance of women's health.

The meeting also discussed various cancers in women such as breast, cervical, ovarian, and uterine, fibroids, among others.

Mrs Linda Asante Agyei, the Vice-President, Ghana Journalists Association (GJA), described women as the pillars of every home and therefore they should be mindful of their health.

“As Women, our health should be very paramount, once we break down, the entire building collapses. Some of the diseases are preventable, let us be mindful and prevent them to avoid spending so much money.”

She charged women to prioritise their health to enable them live better and longer, for the benefit of their families and the society at large.