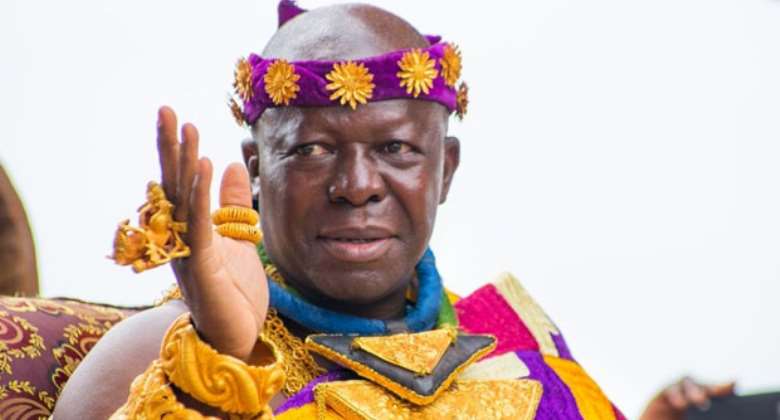 His Majesty Otumfuo Osei Tutu II, Asantehene, as the Asante custom demands, on Sunday evening, stormed Koforidua, the Eastern Regional capital to attend the wake keeping at the Yiadom-Hwediem Palace to mourn with the New Juaben Traditional Council over the demise of the Omanhene and the Queen mother.

The final funeral rites and burial of the late Omanhene of New Juaben, Daasebre Oti Boateng and the late queen mother, Nana Yaa Daani II is scheduled for this week.

Otumfuo was led by a lot of chiefs of the Asante Kingdom to Koforidua on Sunday. They will be present at New Juaben to mourn with the family of the late chiefs.

On Monday, which is the grand funeral day, Otumfuo delegates Kumawuhene, Barimah Sarfo Tweneboa Kodua to represent him at the Doteyie of the late Daasebre (Prof. Emeritus) Oti Boateng and Ohemaa Nana Yaa Daani II.

The late Emeritus Professor Emmanuel Oti Boateng was the paramount chief of New Juaben, a community created in the Eastern Region in 1875 for Asanteman war refugees.

In 1992, he took the stool name Daasebre after succeeding his blood brother Nana Kwaku Boateng II as paramount chief of New Juaben.

Daasebre was the Chancellor of All Nations University in Koforidua and a recipient of numerous national and international accolades.

He was a member of the Yiadom-Hwedie royal dynasty of Juaben, Asante Juaben, and New Juaben.

He left behind 12 children.