Deborah And The Who Born Dog Treatment 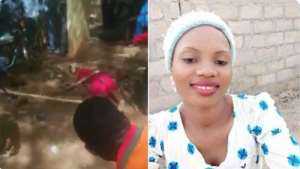 Intentionally refraining from the black and white ritual of expression while seeking audio visuals of recent as a means of effective communication has been cathartic, my own way of recalibrating, probably reinventing self with certain anticipation of ambiguous avoidance in the realms where custodians of societal conscience aboard. There seem to be a thin line between what's written and how it's read for ease of comprehension by experts whose minds are overwhelmed by prejudice.

My dear brother Idongesit Uyo had rightly said the other day that Hypocrisy is an Akwaibomite. In as much as I would love to speak well of all of us as one who would rightly protect his own thief while handing the rest of the criminals to the law like our Buhari APC does to anyone laden with corruption cases wholely forgiven and pardoned of all sins the moment such pledges allegiance to the mighty coverings of a Party capable of wiping away all records of past public misdemeanor.

The brutal murder of Sister Deborah has forced my fingers to type, yet I am not here to condemn her killers for that's the job of President Mohammed Buhari and his security system whom we have read online have claimed that the proud young man with a match box is not a Nigerian and can't be found. A country that could extradite Nnamdi Kanu from God knows where can't find the boy. I love and fear this country.

Back home to my beloved Akwa Abasi Ibom State of hypocrites. A State where a gubernatorial aspirant is celebrated for repeatedly chanting "Who born dog?" and is doing everything possible to be the next Governor of the only State named after God. The hypocrites do not see anything wrong in that phrase but they are calling for the heads of the murderers of Deborah who actually gave her the "Who born dog" treatment in practical terms.

Here we pummel the dogs to the point of absurdity before setting them on fire then chopping them to prepare the popularly known 404 dog meat. It's a demonic way to kill an animal for a delicacy, yet I love eating that meat on a good day with the native palm wine, and because we treat dogs this way I forgive the killers of Deborah for even in Akwa Ibom State, a gubernatorial aspirant and his Supporters wouldn't mind giving opponents the dog treatment yet hypocrisy blinds them to the pointing of a single accusing finger on the Muslim extremist while applauding their Political intolerance of truth with the remaining conscienceless blood stained, trigger hungry fingers.

While I blame Deborah for talking against The Beloved and highly respected Prophet Mohammed in the fit of academic anger and justification, I will also blame any supporter of Pst Bassey Umo Eno who in the midst of the Who born dog crew cannot keep politics out of the discussion since only those who have lost spirit, soul and body will often resort to violence to proof a non-existent Power.

I see nothing wrong in saying Allah is great if I can return home safely to my family and thank my Jesus for the wisdom. I see no crime in removing the sticker (Politically or Religious) from my car in a certain location if that would bridge my safety and mine.

My dear Akwaibomites, if you are crying for Deborah and applauding "Who born dog!", you are a hypocrite, your tears are useless, vain and repugnant to common sense. If you condemn the Who born dog treatment meted against Deborah yet you see nothing wrong in a possible mega cult wars and intolerance looming if we make a mistake on who becomes the next Governor of this state, then your selective judgment is nothing short of betrayal.

To Muslim Extremists, please don't waste the dog (the infidels) meat after the killing and burning it, it's a delicacy. Eat it, don't waste it.

To those who will kill for Politics, please don't run after the killing, take your dog meat home and enjoy it with chilled palm wine.

I know some of you will comment like the Muslims who killed Deborah, please don't disappoint Nigerians and the world, let's see the Christians amongst us who are Political extremists ready to maim and kill for their Prophet to be in Power come 2023.