Ending Child Marriage in Ghana: The real numbers and the critical role of the media 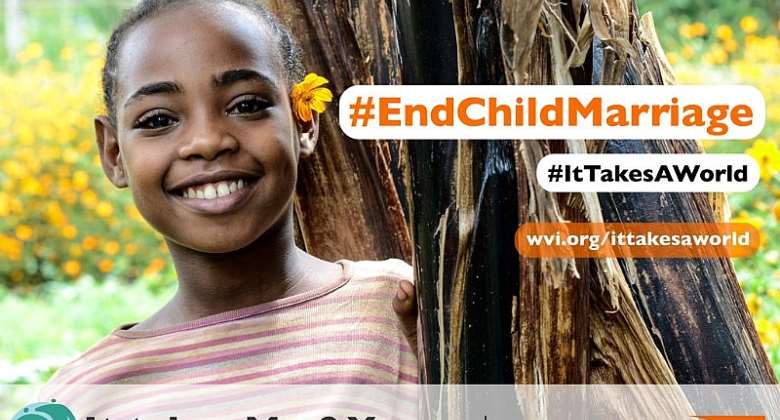 Child marriage in Ghana has been a cause for concern in recent times given the statistics and the negative impacts it imposes on the victims.

Child marriage refers to the marriage of a child before the age of 18. Normally, it is forced and instigated by many factors. This affects mostly girls.

Research by World Vision Ghana (WVG), and University of Ghana revealed that the practice has reduced over the past four years, however, the current numbers show that there is still much to be done.

For instance, the national average of child marriage for girls aged 20-24 stands at 19.3%, as shown by the Multiple Indicator Cluster Survey (MICS 2017- 2018), which is an improved rate from the previous rate of 21%.

This canker is not only pertaining to Ghana but globally; no wonder the African Union (AU) Commission, United Nation bodies, International NGO’s and Development Partners are committed to joining efforts to eradicate child marriage in Africa and other part of the world.

The research revealed a common cause of child marriage as teenage pregnancy.

Other causes included, poverty, where parents believe that marrying off their child relieves them of financial burden.

There is also betrothal and forced marriage, as well parental neglect, lack of zero supervision, among others.

The research also indicated some negative effects of child marriage. Some of these are 1, end of the girls’ education, majority of child brides did not have any formal education, most girls do not proceed further than primary school or JHS because of teenage pregnancy and child marriage.

Additionally, child marriage has an adverse consequence for women’s physical wellbeing, most child brides are predisposed to domestic violence mainly physical, verbal, and sexual abuse, as well as psychosocial effects.

There is the need for a multifaceted approach to address the root causes and seek measures to make laws more effective and to change behaviour and attitudes to end the menace.

To ensure that child marriage is curbed and ultimately ended in Ghana by 2030, key stakeholders led by the Ministry of Gender, Children and Social Protection developed the National Strategic Framework (NSF) and Operational Plan to End Child Marriage.

The NSF, a document that mirrors Ghana’s pledge to end child marriage, ultimately seeks to provide an integrated vision and clear direction while outlining various critical strategies to be employed by various stakeholders and institutions in Ghana to contribute to the eventual elimination of child marriage and other harmful practices.

The critical role of the media

The role of the media as agents of change cannot be overemphasised. Unfortunately, the issue of Child Marriage has not received any proper attention as other issues like entertainment, climate change, everyday-news, and others.

There is therefore the need for the media to increase advocacy, and campaigning against child marriage in Ghana.

In a media capacity building programme organised by World Vision Ghana, media personnel who participated were taken through various presentations on how to increase awareness creation on child marriage.

Some of the key means highlighted were agenda-setting, discussion forum, and advocating for change.

In contributing towards the implementation of Ghana’s Strategic Framework on ending child marriage, World Vision Ghana (WVG) is seeking to support a media coalition that seeks to contribute to the ending of child marriage in Ghana.

WVG believes that the media has a critical role to play in issues regarding child protection broadly and child marriage specifically.

The media informs the populace about important issues and can help shape how child marriage is spoken about and understood by the public.

“Engaging with the media and ensuring accurate coverage of child marriage is vital. The media, acting as the 4th estate plays a role in holding public officials and institutions accountable on policies and programs that ensure the promotion and protection of the girl child,” says Barbara Yeboaa Asare Amegavie, Campaigns Coordinator for WVG.

Hottest Photo Reports
Catch up with all the political quotes from our politicians.
Advertise here
More from Article
ModernGhana Links
How Africa can Achieve Food Sovereignty and Boycott Neo-Colonial Interests
Doing politics with the house of God: Some insights from political marketing
African Youth deserve better learning opportunities
TOP STORIES