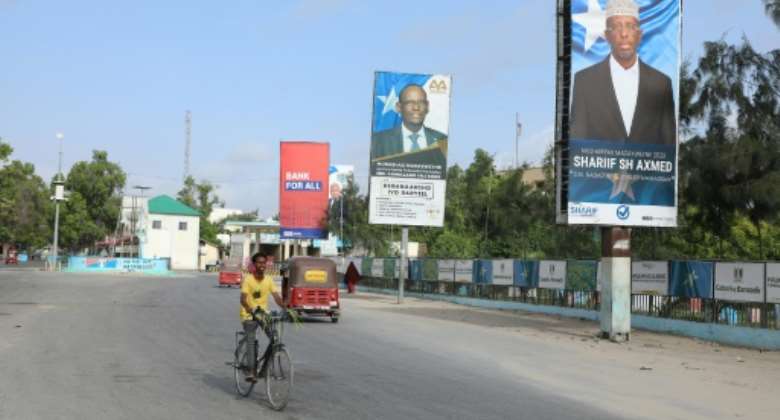 The Horn of Africa country was supposed to choose a new leader in February 2021 but missed the deadline as Somalia's political leaders squabbled over the election process.

The impasse turned violent when then-President Mohamed Abdullahi Mohamed, better known by his nickname Farmajo, extended his term in what opponents decried as an unconstitutional power grab.

Farmajo appointed his prime minister to arrange a fresh vote but the task drove a wedge between the two men, putting the vote even further out of reach.

The crisis paralysed the government at a time when stability was badly needed to confront the burning challenges at hand, analysts said.

Farmajo's presidency exacerbated tensions between the central government and some states, most notably Jubaland, and there were violent clashes between their respective forces.

The outgoing president was also accused of using Somalia's security forces to further his political ambitions while in office.

In a victory speech to the nation after being sworn in following Sunday's vote, Mohamud struck a conciliatory tone, promising to "heal any grievances" as the country moved forward.

"His message to them, the federal member states and the MPs that supported President Farmajo, is not to fear his presidency," said Samira Gaid, executive director of the Mogadishu-based Hiraal Institute think tank.

"I think... that (is the) kind of work, on reconciliation and political dialogue, that needs to happen."

Mohamud, who ruled Somalia between 2012 and 2017, confronts a familiar threat that dogged his government and others for over a decade -- a deadly and persistent insurgency by the Al-Shabaab militant group.

In March, the United Nations renewed the mandate of a 20,000-strong African Union force known as AMISOM that has been on the ground since 2007 to support the foreign-backed government in confronting the Al-Qaeda-linked jihadists.

The reconfigured mission, dubbed ATMIS (the African Union Transition Mission in Somalia), calls for a more offensive strategy than in recent years with the goal of gradually reducing troop numbers to zero by the end of 2024.

In March, the United Nations renewed the mandate of an African Union force that has been on the ground since 2007 to support Somalia's government in confronting Al-Shabaab. By MUSTAFA ABDI (AFP/File)

Somalia's international backers have warned that the prolonged infighting over the election has distracted from the threat of Al-Shabaab, which has consolidated its rural territory and in recent months stepped up attacks.

"Things have changed. Al-Shabaab is not the same as it was when he (Mohamud) left office in 2017," Gaid said.

Omar Mahmood, an analyst at the International Crisis Group (ICG) think tank, said a new leader could also consider a more political approach to tackling the Islamists, and perhaps even set the mood for any possible dialogue with them.

"How a new administration signals about that, the tone it presents, is very important early on," he told AFP before Sunday's vote.

"Even if Al-Shabaab isn't ready right now, it's sort of opening up a channel... to lay the groundwork" for any dialogue.

Somalia is vulnerable to climate shocks, and currently suffering its worst drought in decades.

Humanitarian organisations have warned that without a significant increase in aid, Somalia could soon face a famine not seen since 2011 when 260,000 people perished from hunger. By Roberto SCHMIDT (AFP/File)

The United Nations says some 6.1 million people -- roughly 40 percent of the entire population -- have been affected and 760,000 people have fled their homes.

Humanitarian organisations have warned that without a significant increase in aid, Somalia could soon face the kind of famine not seen since 2011 when 260,000 people perished from hunger.

The government has little capacity to tackle the problem on its own.

But observers say political stability in Mogadishu would help in coordinating the emergency response, and presenting a unified appeal for aid.

Economy on the edge

According to the World Bank, nearly three-quarters of Somalia's 15 million people live on less than $1.90 (1.80 euros) each day.

The election delays threaten a crucial assistance package from the International Monetary Fund, which expires automatically on Tuesday if a new administration does not approve key reforms.

The government has asked for a three-month extension to this deadline.

But it instead contracted as the coronavirus pandemic, a locust infestation and floods took their toll, the World Bank said, and forecasts are still below pre-Covid projections.

Pervasive corruption also continues to be an issue -- Somalia sits near the bottom of Transparency International's world corruption index, ranking 178 out of 180 nations alongside Syria.