C/R: Man attacks girlfriend with machete; leaves her with cut wounds for denying him sex 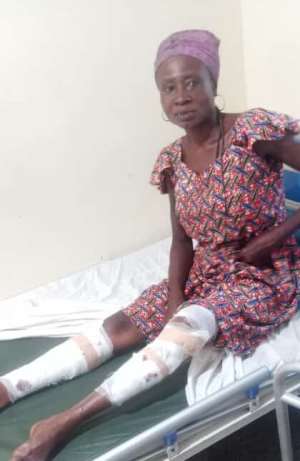 A man identified as Bob has left his girlfriend Akua Baduwaa with machete wounds at Abakrampa in the Central Region for allegedly denying him sex.

The 45-year-old man per information gathered has been dating the woman who is 56-year-old for a while and has often displayed a high level of jealousy.

On Sunday afternoon at about 1:30 pm, Bob and Akua were reportedly involved in an argument over some misunderstanding bothering on sex.

The boyfriend is said to have gotten furious and due to lack of control, attacked the girlfriend with a machete.

Amid shouts for help, the woman was left with cutlass wounds on her legs and waist.

Neighbours who heard the cry of the woman came to her rescue but Bob took to his heels to avoid lynching.

The woman was subsequently sent to the Abura Dunkwa government hospital in the Central Region where she is receiving medical care.

Meanwhile, the suspect, Bob has been arrested and in the custody of the Abura Dunkwa Police Command.

Reports suggest that before Sunday’s incident, the man had beaten the woman on other occasions when he saw her with other men.