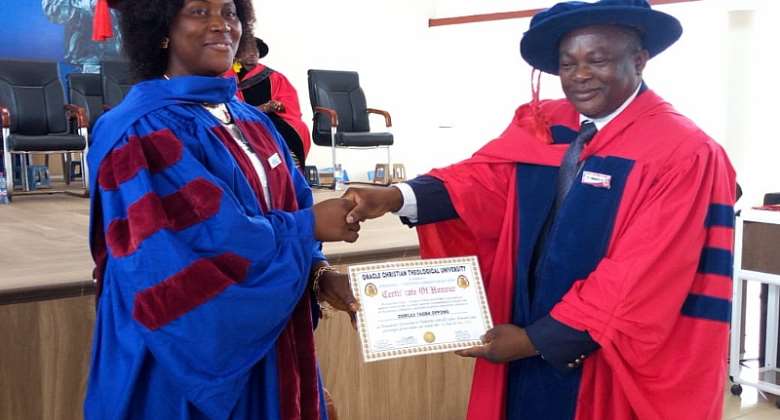 The Oracle Christian Theological University in UK has conferred an Honorary Doctor of Humanity on Mrs. Dorcas Tagba Oppong, a teacher at the Sunyani Social Welfare Technical and Vocational Training Centre in Sunyani in the Bono Region.

The university established in 2016 aimed at training, ordaining, commissioning, consecrating and honouring awards on distinguished individuals who have made great impact on people’s lives.

As a result, Mrs. Oppong was recognized for her contribution toward bringing positive change in the lives of the needy in the society and her commitment to work.

A citation accompanying the honorary doctorate read; “your zeal to help the needy and marginalised in the community led to the establishment of the Daapu Vocational and Technical Training (DAVOTECH), which started at your home in 2010.”

It stated, “You started with one student in the year 2010, who was a school drop-out, but you saw the potentials in her as you trained the student theoretically and practically after which she wrote the Basic Education Certificate Examination and passed”.

It further said, “This success inspired you to help more needy people and also motivated you to formalize this work into a group in 2015 that gave birth to DAVOTECH to offer free training and certificates to the needy”.

The citation added, “For the past five years, DAVOTECH has been able to support 105 vulnerable persons made up of 96 females and nine males to receive certificates in various areas of technical and vocational training and they are currently gainfully employed”.

It stressed, “Your commitment to hard work and bringing positive change to the society is noticed even in your extra curriculum activities with the Sunyani Central District of the Church of Pentecost from 2003 to date.

“Therefore, for your devotion to humanity service the International Doctrinal Council of Oracle Christian Theological University under the leadership of Bishop Professor Vincent Adu, the Global President, confer on you, Honorary Doctor of Humanity”.

Mrs. Oppong, who is the Head of Catering Department of the Sunyani Social Welfare Technical and Vocational Training Centre, was born on 26th March, 1974. She is married to Mr. Francis Oppong and blessed with four children.

She pursued Cookery for Catering Industry programme at the Bolgatanga Technical Institute from 1996 to 1998 and later to the then Sunyani Polytechnic for her advance course from 2001 to 2002.

Mrs. Oppong obtained a Diploma in Education from 2011 to 2012 and a Bachelor Degree in Catering and Hospitality Management from 2017 to 2021 from the University of Education Winneba.

She started work as a cook at the Black Star Hotel at Bolgatanga, the Methodist Vocational Institute and now the Social Welfare Vocational Technical Institute.

Mrs. Oppong held various positions in the Social Welfare Vocational Institute and actually rose through the ladder of success starting as a technical Instructor through to the rank of a Chief Technical Instructor, a position she had held from 2018 to date.

She is also a practical examiner with the technical examination unit and serving on different committees in the school such as the disciplinary committee and academic board.

At the Church of Pentecost, Mrs. Oppong served as the Sunday School Teacher, Marriage Counsellor, a District Marriage Committee Secretary and leader in the Women Ministry among others.

Her DAVOTECH offers all vocational and technical programmes with various levels of certification freely to most people who need it to look for employment or further up their education.

Currently, DAVOTECH has three staff who work in collaboration with other institutions to help support people to pursue their dream by providing technical and vocational training even when they cannot afford.

Speaking to present the award, the Global President of the University, Bishop Professor Vincent Adu, admonished the public to learn to cerebrate and honour people whiles alive.

“In Ghana we do not celebrate the living; rather we cerebrate and honour dead bodies,” he stated explaining that Mrs. Oppong deserved to be honoured.

Prof Adu said the award would motivate her to do more for the less privileged in the society, explaining that she was selected through a nomination process established by the executive board members and the approval of the chancellor.

For her part, Mrs. Oppong thanked the university for the recognition and explained that the honour serve as a challenge for her to do more for vulnerable in the society.