African players in Europe: Mane has last laugh on Mendy 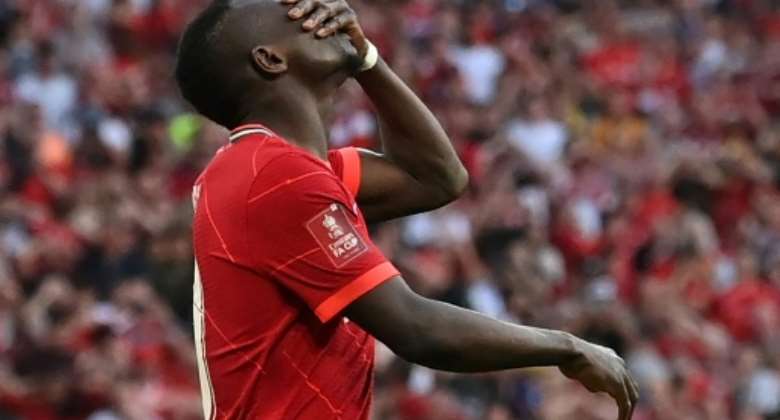 Sadio Mane reacts after missing his penalty during an FA Cup final shootout victory over Chelsea at Wembley stadium on May 14, 2022.. By Glyn KIRK (AFP)

Liverpool forward Sadio Mane had the last laugh on Senegal teammate and Chelsea goalkeeper Edouard Mendy in the FA Cup final at the weekend as the Reds triumphed on penalties.

Mendy saved a Mane shootout kick, but Liverpool triumphed 6-5 on penalties to complete a finals double over Chelsea this season having won the League Cup in similar fashion.

Another Senegal star in the spotlight was Paris Saint-Germain midfielder Idrissa Gana Gueye, who missed a 4-0 win at Montpellier for "personal reasons".

It is widely believed he opted to miss the match because he disapproved of wearing a shirt with rainbow motifs for Ligue 1's weekend in support of efforts to combat homophobia.

Here, AFP Sport highlights some of the African performers in European leagues at the weekend:

Mane scored the winning spot-kicks as he and Mendy lifted the Africa Cup of Nations and qualified for the World Cup in shootout wins over Egypt this year. However, this time he failed to find the net with the chance to win the Cup as Mendy saved low to his left.

Mahrez saw his 86th-minute penalty saved as Manchester City's march toward the Premier League title stumbled in a 2-2 draw at West Ham. Earlier, the Algerian did have a hand in the City equaliser as his free-kick was turned into his own net by Vladimir Coufal.

The Moroccan secured Champions League qualification for Sevilla after heading a late equaliser that snatched a 1-1 draw against Atletico Madrid. Sevilla needed a point to seal their place among La Liga's top four, but their fight looked set to go to the final day of the season after Jose Gimenez gave Atletico the lead. En-Nesyri saved Sevilla with five minutes left, nodding home Oliver Torres' cross.

Senegalese Ciss scored his third goal of the season, but could not prevent Rayo losing 2-1 away at relegation-battling Mallorca. The midfielder headed in a corner to equalise on the hour, but Mallorca struck a 92nd-minute winner, Abdon Prats firing in to boost Mallorca's survival hopes.

Nigerian Osimhen put Napoli ahead during the first half in a 3-0 victory over relegated Genoa that guaranteed a third-place finish in Serie A. It was his 14th league goal of the season, leaving him 13 behind Golden Boot leader Ciro Immobile from Lazio.

The Nigerian finished the season with 20 goals after netting twice in a 3-2 home win over Bochum which secured Europa League football for Union. He converted a penalty to put Berlin 2-0 up, but after Bochum levelled, Awoniyi muscled his way into the box, chested the ball down and smashed in the 88th-minute winner.

The Algeria striker netted an early penalty as Hertha looked on course to win at Borussia Dortmund on the last day of the season and guarantee their survival. However, the hosts roared back with Youssoufa Moukoko scoring the winner moments after coming off the bench. The away defeat means Hertha must win a two-leg play-off against second division opponents to remain in the Bundesliga.

Gueye was facing questions in France after missing PSG's away win against Montpellier for what coach Mauricio Pochettino called "personal reasons". It is widely believed he opted out because he disapproved of wearing a shirt with rainbow motifs for Ligue 1's weekend in support of efforts to combat homophobia. The Rouge Direct anti-homophobia group said. "The LFP (League) and PSG must ask Gana Gueye to explain himself and very quickly. And punish him if necessary."

Cameroon international Lamkel Ze scored a 50th-minute header to give struggling Metz a 1-0 win against Angers. Metz have 31 points to put them in 18th place, equal on points with Saint-Etienne, meaning they are currently in the position for a play-off against a Ligue 2 team. Metz face already-crowned champions PSG next weekend when Saint Etienne play Nantes. "We're still alive," said Metz coach Frederic Antonetti.

Hottest Photo Reports
Catch up with all the political quotes from our politicians.
Advertise here
More from Football News
ModernGhana Links
TOP STORIES