Nkoranza Youth threaten police to produce colleague in custody or else... 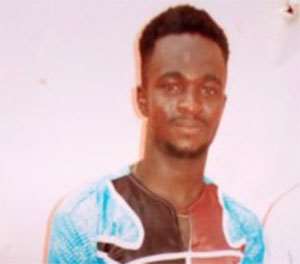 Angry youth in Nkoranza South Municipality of Bono East Region are threatening mayhem against police in the municpality if the law enforcement agent fails to produce their colleague, Albert Donkor, who was allegedly picked up by the police in the night of April 25 and has since not been traced.

They have therefore given the law enforcement agency a four-day ultimatum to produce the 27-year-old shoes/sandals seller, allegedly and falsely accused of being part of a robbery gang.

To demonstrate their resolve to carry out the threat if their demand is not met, the youth last Friday blocked some major roads in the capital and burnt car tyres amidst chanting war songs.

DAILY GUIDE gathered that police officers in the municipality run for cover.

Regional Police Commander DCOP Moses Atibila and his men rushed to the municipality last Saturday to calm nerves, among assurances from the IGP, Dr. George Akuffo Dampare, that investigation into the matter was underway.

However, the youth still insisted the police should produce their colleague in court within four days, starting last Saturday or face their wrath.

According to them, the 48 hours within which a suspect must be produced in court on any charge has elapsed for over two weeks.

They alleged their colleague has been unjustifiably 'killed' by the police, and are keeping him to themselves without informing the family about his whereabouts.

“The police have since kept his mother and other family members in suspense. Family members are being tossed about on his whereabouts. Since he was picked up, the mother was told he was sent to Techiman and we followed it but were directed to Kintampo; and from there to Accra, but we still cannot have access to our friend,” they stated.

The youth, led by Nana Nyarko Ababio, explained that five personnel of the Ghana Police Service, at about 1am on April 25, 2022, while the suspect was asleep, surrounded their house and picked him from his room with other items, and sent him to the Nkoranza Divisional Police Command on suspicion of being part of a robbery gang.

According to Nana Nyarko, the mother of the suspect, Comfort Gyamiah, followed officers in the night to the station but was asked to return home since he was safe in their hands.

According to him, it was rumoured the following day that Albert Donkor was picked on suspicion of being part of a robbery incident that took place on Nkoranza-Kintampo road.

They said, “Albert Donkor was denied access to a lawyer while his family members were also denied access. He was never tried by any competent court and today all we are hearing is that Albert is dead.”

“How reckless can the Police Service be? This is indeed a case of injustice. The people of Nkoranza cannot stay silent when an innocent indigene of the area has been targeted and killed,” they added.

They have, therefore, called on President Akufo-Addo, the National Security Minister, the Member of Parliament for the area and the MCE, to ensure the police follow due process or incur their wrath.