The Train Is Coming - Part 4 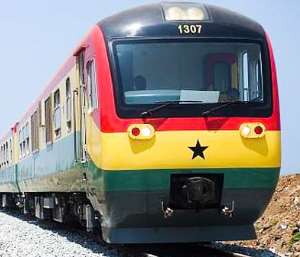 “Seeing is believing” is an ancient adage. Ghana's coming railway journey looked ever more real to me when I saw for myself the amount of brand new standard tracks and shiny new bridges and stations under construction.

I am even more astonished that this development is happening on the blind side of most Ghanaians. As explained by Mrs. Susana Kudjoe, the Deputy Chief Executive Officer (CEO) of Ghana Railway Development Authority, “With railways, you only make noise when you have trains actually running”.

That is true, but even so, only the most pessimistic doubter would not be impressed with the amount and quality of work that the railways sector has achieved over the past few years. The gleaming new tracks of the Eastern Extension Line provide the basis for hope that our coming railways journey is not a mirage.

Not being an expert in economic development, I hesitate to make categorical statements about the subject, but one I will not shy away from making is this: there can be no real long-term development without a viable railway network in our country.

It is unfortunate that the railways and the production they engendered and transported worked for the benefit of the colonialists. Since independence, very few tracks have been added, while the greater part of the system has been allowed to collapse.

Now, the only rail line that operates with anything like normal service is the Accra-Nsawam short route, but that has minimal impact on the overall volume of transportation between the two points.

Luckily, the evidence on the ground (pun fully intended) is that things are about to change for the better. My trip to two sites on the Eastern Extension Line which currently runs from Tema Harbour Station to Mpakadan had been delayed by the Easter holidays, and I couldn't wait to get the feel of where we are going with the trains hopefully soon.

First stop – Tema Harbour. The railway station is under construction but the new shiny rails are firmly embedded, and engineers were busy installing signals along that stretch of the line.

The multiple lines and switching points look as sophisticated and well-engineered as you might find anywhere in the world. Although the station is partly covered in sheets to shield the workers and protect the ongoing works, its outline looks modern and functional.

Situated a few hundred metres from the entrance to the Tema Port, one can only imagine how busy this station will be in the near future.

At the moment, the Tema Harbour serves other landlocked countries to the north of Ghana, so rail services would make it cheaper, easier and safer to transport heavy goods from the harbour to other parts of the country and beyond.

The Eastern Extension actually is part of a transport mix that makes sense. The rail lines have now crossed the River Volta, and the Mpakadan Station will be the hop-on and hop-off points for connecting with transport on the River Volta, thus creating viability for the long overdue use of the Volta as a major transport route between the north and south of the country.

Next stop – Doryumu Railway Station. It is a beauty to behold. In the far distance are the Shai Hills in their splendid majesty – greyish in the horizon – permanent and untouchable. Just across the station on the other side of the tracks is a large expanse of pristine green vegetation which looks so gorgeous, I wish it could be fenced for protection.

One can almost already see the transformation the railways would bring to that area which is famous for growing fruits and vegetables such okro, tomatoes, cassava, spinach and mangoes.

There is considerable evidence that economic activities pick up when rail services are extended to a community. Ghana's economic geography and history of the 20th century was heavily influenced by the geographic penetration of railways during the period.

Towns that had railway stations developed into major trading centres, or at least important market centres for foodstuffs, cash crops, minerals and timber.

The uplift in economic fortunes created viable economies by creating jobs in other sectors. This will definitely be the case for communities in the Doryumu area with the coming of the railways and a major transit point.

As Nana Ama Opoku, the Public Relations Officer of the Ghana Railways Development Authority, conducted me on my tour through the station, we imagined how the station could attract food and drinks sellers, fruit vendors and bookshops, among others.

For myself, I was happy to see the tracks that will lead us into the future. Beginning from where I started the series on railways, I confirm my membership of the imaginary train-loving club. I cannot see the country developing without railways playing a major part.

I think the government has done well to keep its railway promise alive, even in difficult times, and the railway authorities should make a bit more noise about how far they have come so far.

Speaker Bagbin calls on Israeli counterpart in Jerusalem
36 minutes ago