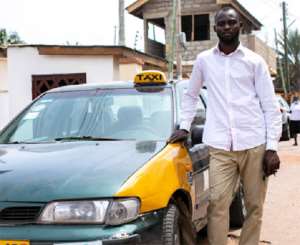 The trail Vice President Dr. Mahamudu Bawumia blazed last week when he honoured honest taxi driver Kwesi Ackon for returning an amount of GH¢8,400 to its owner is being followed by many more, the latest being Dr. Lawrence Tetteh.

The man of God, Dr. Tetteh, has announced on state television, GTV, that he is ready to purchase a brand new car for the honest taxi driver in recognition of his honest gesture which made news last week.

The cabbie who is said to be driving somebody's else's taxi and lives at Accra Newtown not far from Mallam Atta, is on the verge of owning his own car and a swelling kitty, thanks to his honesty.

Joining the list of high profile personalities to honour the cabbie is Ghana's soccer celebrity Asamoah Gyan, who has offered an amount of GH¢10,000 to the cabbie.

The list of persons contributing to the kitty of the good-natured taxi driver is long, and currently it is unknown how much he has received so far, especially with many more offering to donate to his cause.

For being an informal ambassador of the Church of Pentecost, of which he is a member, the management of the faith grouping has promised to also join the list of donors to the cause of their own man.

Last week, Kwesi Ackon attracted the attention of the nation when he returned the money to its owner at the Mallam Atta Market in Accra.

Overwhelmed with excitement and joy, the elderly woman could be heard in a video which went viral on social media praying for the good man in Akan “may God bless you” repeatedly as another woman who sounded like a relative of the owner of the money, saying “we could not sleep last night.”

For the many who gathered around to listen to the story as the good man delivered the money to its owner, it was a rare occurrence in a world where it would appear the number of the dishonest outnumbers the honest.

Be it as it may, Kwesi Ackon is one of the honest persons who demands celebration.

It was popular journalist Manasseh Azure who posted on his Facebook the rare occurrence and proceeded to add that honouring the rare personality beyond the “May God Bless Him” would be an appropriate thing to do.

Word reached the Vice President, who seized the opportunity to blaze the trail, which has caught fire in the Ghanaian community.

The package was presented to the honest cabbie by Manasseh Azure on behalf of the Vice President alongside GH¢5,000 donated by another person.

For followers of international news, they could not but remember a similar occurrence in Monrovia, Liberia, where a commercial motorbike taxi returned an amount of $50,000 to its owner. President Opong Weah offered the young man an amount of $10,000 and a state scholarship for university education. The good man also received two brand new motorbikes.