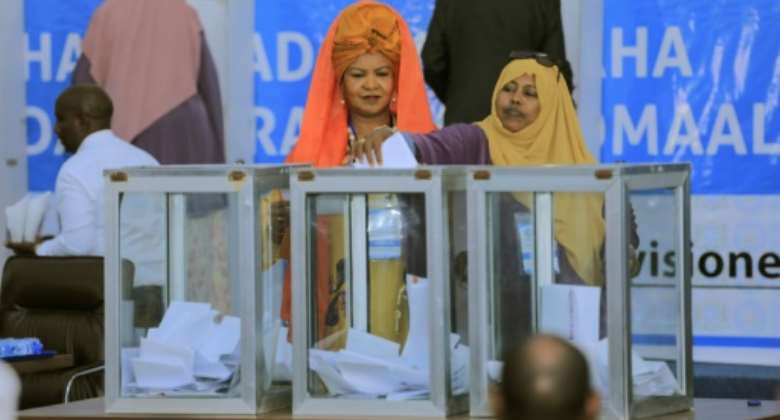 The vote, which has been dogged by claims of irregularities, is expected to draw a line under a political crisis that has lasted well over a year. By STRINGER (AFP)

Somalia's president battled his predecessor for the top job Sunday in long-overdue elections in the troubled Horn of Africa nation, as it confronts an Islamist insurgency and the threat of famine.

As MPs voted in a tent inside Mogadishu's heavily-guarded airport complex, explosions were heard nearby, underscoring the treacherous security situation in the country, which has seen an increase in attacks by Al-Shabaab jihadists in recent months.

Police said no casualties were reported in the blasts, with little movement seen in the capital Sunday where police have imposed a curfew until Monday.

After hours of voting involving 36 candidates, the complicated election process entered its third and final round, with President Mohamed Abdullahi Mohamed, better known as Farmajo, facing off against his predecessor Hassan Sheikh Mohamud in a repeat of the pair's contest in 2017.

The winner will now be decided on the basis of a simple majority.

The vote, which has been dogged by claims of irregularities, is expected to draw a line under a political crisis that has lasted well over a year, after Farmajo's term ended in February 2021 without an election.

His attempt to extend his rule by decree triggered violent street battles in Mogadishu between rival factions before international pressure prompted him to ask Prime Minister Mohamed Hussein Roble to seek consensus on a way forward.

Somalia's international partners have repeatedly warned that the election delays -- caused by political infighting -- were a dangerous distraction from the fight against the Al-Qaeda-linked insurgents who have been fighting to overthrow the government for more than a decade.

In addition to a months-long feud between Farmajo and Roble, the central government has also been embroiled in disputes with certain states, slowing down the voting process and frustrating citizens.

'Alliances rather than ideas'

Somalia's international partners have repeatedly warned that the election delays -- caused by political infighting -- were a dangerous distraction from the fight against Al-Shabaab. By STRINGER (AFP)

"In terms of predicting the outcome, Somalia politics is notoriously difficult to predict, especially because it is an indirect, sort of closed system with MPs voting for the president," said Omar Mahmood, an analyst at the International Crisis Group (ICG) think-tank.

Samira Gaid, executive director of the Mogadishu-based Hiraal Institute think tank, told AFP ahead of the election that familiar names would enjoy an advantage in the polls.

As the delays have dragged on, the country has also been in the grip of surging inflation and a devastating drought that threatens to drive millions into famine.

The international community has long warned the Farmajo government that the political chaos has allowed Al-Shabaab to exploit the situation and carry out more frequent and large-scale attacks.