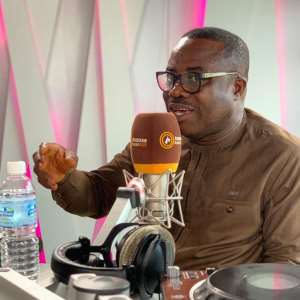 Ahead of the internal regional executive elections of the ruling New Patriotic Party, the Greater Accra Regional Chairman of the party, Divine Otoo Agorhom, has charged delegates to vote for competent and hardworking executives to make the 'breaking the eight' slogan of the party a reality.

Speaking in an interview on Asaase Radio Breakfast Show on Friday, 13th May, 2022, Chairman Agorhom underscored the need to elect hardworking individuals into political positions to accelerate the pace of the country's development. To work for the party's success is to work in the nation's interest", he emphasized.

Mr. Agorhom also called on party members at loggerheads to make peace with one another, and work together in unison in the common interest of the NPP. "Let us unite and work together to break the eight; we cannot afford making breaking the eight a mere rhetoric. Let's be deliberate and conscious about it by working hard as though we are in opposition. That is what we need to do," he stated.

On the issue of Greater Accra constituencies which the NPP lost to the NDC in the 2020 general elections, Mr. Agorhom noted that it was unfortunate but had learnt lessons, and was poised to make needed corrections to get it right this time.

"I will not allow what happened in the last election to rear its head again because I believe that we can break the 8 and there will be no prisoners taken this time."

"It is unfortunate that we are where we are and it does not bring a good feeling but let's put the past behind us and forge ahead to reclaim all lost seats within the Greater Accra region. I am prepared to work with anybody the delegates elect, and l expect that other potential executives will also avail themselves to work together to ensure victory for the NPP come December 7, 2024," he stressed.

Hottest Photo Reports
Catch up with all the political quotes from our politicians.
Advertise here
More from NPP News
ModernGhana Links
[Video] NPP can break the 8 with a new face, not Bawumia – Addai-Nimo
NPP elections; I stand tall among the other candidates - Prince Kamal Gumah
Break in communication affected NPP's performance in 2020—National Youth Organiser aspirant
TOP STORIES