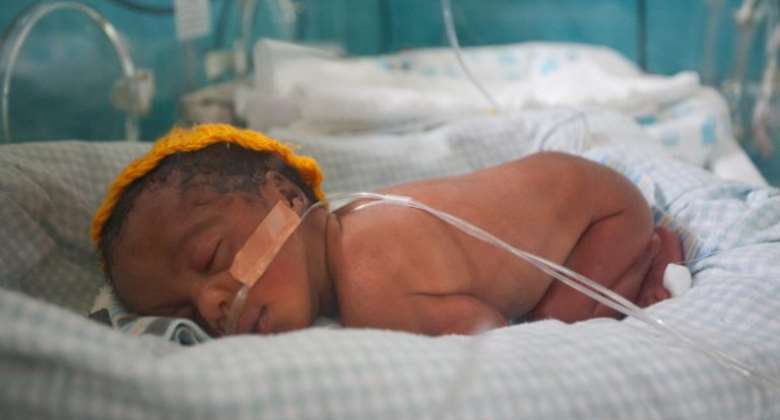 Dr. Alfred Gardemor, Principal Optometrist and Head of the Optometric Center at the Nsawam Government Hospital has stated that premature babies have a higher risk of developing eye problems.

He stressed when a baby is born prematurely, a lot of development has not taken place, which makes it prone to other health conditions including eye problems.

“One of such conditions associated with premature babies is the misbehaving of some organs in the baby’s body as a result of the unavailability of oxygen right after birth,” Dr. Alfred Gardemor who is the Public Relations Officer of the Ghana Optometric Association (GOA) stated at the fifth edition of the Ghana News Agency-Tema Regional Office and the Ghana Optometric Association fortnightly public sensitization initiative “GNA-GOA: My Eye! My Vision!"

The fortnight initiative is a collaborative public education advocacy campaign to promote the need for people to access eye care and also to draw attention to vision health, which was monitored by the Communication for Development and Advocacy Consult (CDA Consult) in Tema.

The GNA-GOA: My Eyes! My Vision! The initiative also seeks to challenge the public and policymakers to focus on vision as a health issue, which forms a critical component of mankind’s wellbeing but is often neglected.

Dr. Gardemor who was speaking on the topic: “Children’s Vision and Eye Health”, said lack of oxygen right after birth also prevented the brain of the baby from functioning well because the brain needed oxygen to function well.

“There are some babies that do not cry at birth, when the baby cries he takes in its first breath, so if you don’t cry they slightly spank you to cry so that your lungs get filled with oxygen,” he added.

The Principal Optometrist and Head of the Optometric Center at the Nsawam Government Hospital added that where the baby did not cry after several attempts to breathe, the brain does not get enough oxygen for some time to perform its task.

He mentioned some of the congenital eye conditions as cataracts, glaucoma, and esotropia among others adding that children born with eye problems had challenges that impeded their ability to read and recognize objects.

Dr. Kwame Oben-Nyarko, Optometrist at Third Eye Care and Vision Centre has called for conscious efforts to protect the eyes from exposure to direct contact with several environmental factors which could be detrimental to the eyes.

He said spectacles can also be used for the correction of several conditions including doubling of vision and latent and manifest deviations of the eyes.

Dr. Oben-Nyarko stated speaking in: “Acquiring a pair of spectacles: What you need to know” explained that there are two professionals mainly involved in the dispensing of glasses; “the professionals are Optometrists and Opticians but their roles vary, however, their work comes together to deliver spectacles of the highest standard and visual quality”.

He said the optometrist is your eyes’ general practitioner and the first point of call into the eye care industry, while an optician is a licensed technician who has been trained to design, provide and “fit” corrective lenses for vision care patients using prescriptions provided by their optometrists.

“The work of these two professionals comes together to ensure a proper pair of spectacles is dispensed to the wearer,” he said.

Mr. Francis Ameyibor, GNA-Tema Regional Manager explained that the two professional bodies have agreed to work together on a public sensitization campaign dubbed: “GNA-GOA: My Eyes! My Vision” to draw attention to vision health.

“We are combining the forces of our professional calling as Optometric Physicians and Communication Experts to reach out to the public with a well-coordinated message.

“We believe such collaboration would serve as a major platform to educate the public on vision health and also serves as a critical stage for the association to reach out to the world,” Mr. Ameyibor noted.