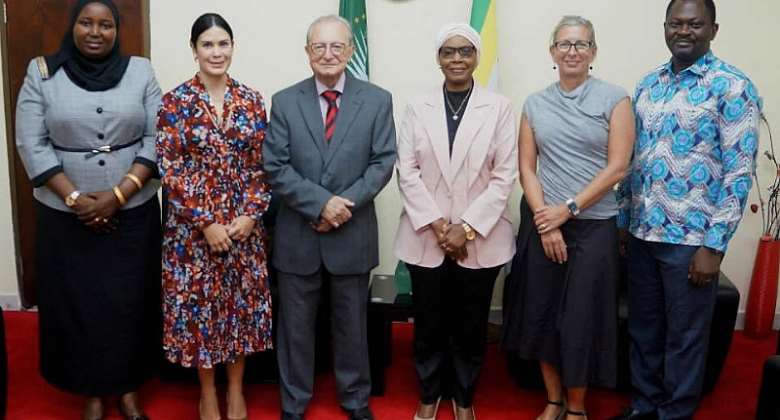 Presidents and officials of the two judicial bodies

Lady Justice Aboud stated during an engagement with Justice Carmel Agius, President of the United Nations -Mechanism for International Criminal Tribunals (UN-MICT) in Arusha, Tanzania, as monitored by the Communication for Development and Advocacy Consult (CDA Consult) in Tema.

The two bodies used the occasion to update each other on the ongoing judicial activities of the two international courts.

She recounted that the Protocol establishing the African Court was adopted on June 9th, 1998 in Burkina Faso and came into force on January 25th, 2004 after it was ratified by more than 15 countries.

On the mandate of the African Court, Lady Justice Aboud said the African Court applies the provisions of the African Charter on Human and Peoples’ Rights and other human rights instruments ratified by the States concerned. It does not have criminal jurisdiction like the International Criminal Court.

She said the mission of the African Court is to enhance the protective mandate of the African Commission on Human and Peoples’ Rights by strengthening the human rights protection system in Africa.

The African Court President said it also ensures respect for and compliance with the African Charter on Human and Peoples’ Rights, as well as other international human rights instruments, through judicial decisions.

On the part of the UN-MICT, its President Agius used the platform to discuss the work of the Mechanism, focusing on its pending judicial activity and areas of possible future collaboration a document made available to the Ghana News Agency in Tema.

The United Nations Security Council created the Mechanism on December 22, 2010 as a “small, temporary and efficient structure”.