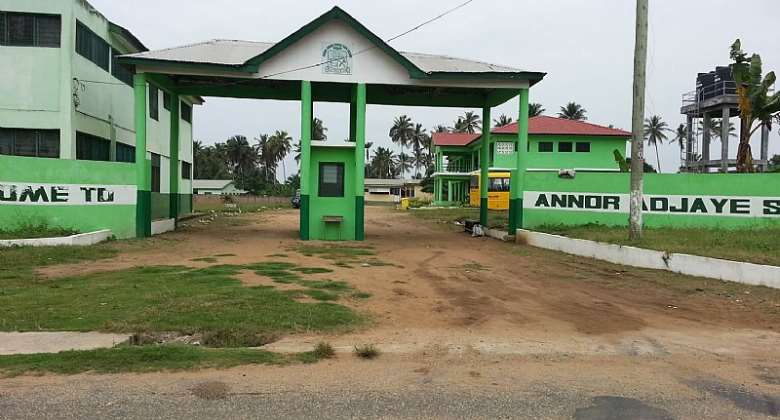 The Old Students Association of Annor Adjaye Senior High School at Ezinlibo in the Jomoro Municipality of the Western Region has defended teachers who allegedly inflicted cane wounds on students at the school.

On Monday, May 9, 2022, some media houses reported that some teachers numbering about seven from the Annor Adjaye SHS, have "brutally lashed" some nineteen final-year students for being late to Sunday Morning Church Service.

But in a press statement issued by the Old Students Association of Annor Adjaye SHS and signed by its Acting President, Stephen Armah Kaku, he described the media reports as irresponsible, vexatious, out of context and unmeritorious and therefore called on the general public to discard the news reports about the issue.

"The Old Students Association is of the view that the report by media general on the happenings of the school on 7th May, 2022 was totally out of context, irresponsible reportage which is not supported by any iota of investigation and as such vexatious and unmeritorious and should be disregarded with the contempt it deserves. The Association is vehemently opposed to this form

of reportage as captured on social media and contends that if such forms of reportage are entertained, to all intents and purposes, teachers and headmasters of senior high school will lose their grips of responsibilities towards the students, a move which will undermine the integrity of teachers and of the teaching profession", he stated.

The Old Students Association is therefore calling on the Ghana Education Service and other stakeholders to dispassionately investigate the matter as soon as possible to restore confidence in the teachers.

Read below the full statement by the Annor Adjaye SHS Old Students Association;

WE THE OLD STUDENTS, CONDEMN CORPORAL PUNISHMENT, However THE ACT OF THE TEACHERS, though corporal punishment, WAS TO SAVE OUR JUNIOR BROTHERS AT THAT POINT OF TIME.

This press release is made on the 12th of May, 2022 pursuant to a report on students, clash of Annor Adjaye Senior High School on 7th May, 2022 by the Assistant Headmaster and investigations conducted by the old Students Association of Annor Adjaye Senior High School (ANNOSA) on the above subject matter as key stakeholders of their ALMA MATER, as captured in the reportage of media general specifically ONUA TV broadcasting network captioned ’teachers beat student to pulp for being late to church service.

The Old Student association finds the said report by the assistant Headmaster out of which ONUA TV reported in part to be preposterous, vexatious and unnecessary to say the least and it is calculated ultimately to cast a dent on the reputation of the School and eventually the people of Nzemaland, particularly Ezinlibo in the Jomoro District.

At this juncture, it will be prudent to peruse the content of the report as written the Assistant Headmaster Administration on that fateful day in the spirit of fairness and thereafter, juxtapose same with the reality on the ground as accounted by the students and the investigations conducted.

The report reads thus ‘’On Saturday, 7th May, 2022, the students of Annor Adjaye Senior High School went for their usual entertainment programme. It was jams. The programme started at 7:00pm and was supposed to end at 9:00pm. Because it was jams, the Day students had come in their numbers to dance.

Around 8:15pm, the power went off. The students were asked to leave for their dormitories because they could not dance in the darkness. The students resisted, claiming that they would use the chargeable speaker for the programme. When the students realized that the masters would not allow them to continue the programme, they started pelting stones at them and the entertainment master being the target, had to take to his heels. When the tension in the hall increased and realizing what the students could do, the other masters went to the hall to assist.

The boys who were at the dormitory started coming back to the hall. The senior House Master was in front of the administration block and prevented them. After some minutes, some members of the community, identified as students on motorbikes went to attack the boys at the boys’ dormitory.

The Masters, and with the help of two security men caught two of the attackers and sent them to the Police Station. After interrogation by the Policemen, the two attackers namely Enock Donkor – 2 Arts 2 and Emmanuel Acquah – 2 Visual Arts mentioned the names of other students involved. They were Eric Kabenlah – 2 Arts 2, Martin Akobanyam – 2 Visual Arts, Prince Precious Akwasi – 2 Arts 2, Daniel Crentsil – 2 Arts 2 and Eric Erzoah Ehwi also known as ‘Indomie’, the ringleader from Ezinlibo Town who was a former student of the school.

While at the Police Station, the Chaplain, received a call from one of the masters that the ringleader and his accompanies had launched another attack at the boys’ dormitory. The students then came out in their numbers with sticks and stones and clashed with the attackers.

The Senior House Master brought the Policemen to campus. The attackers got hint that the Police were coming and they run away. The Police patrolled on campus till 11:05pm.

On Sunday, 8th May, 2022, early in the morning, The Assistant Headmaster academics called the headmaster to brief him about the previous night’s incident. The Headmaster instructed management to conduct thorough investigation into the issue to ascertain the causes of the disturbances and report back to him with recommended sanctions for his attention and necessary action.

Eric Kabenlah in question mobilized some Day students led by Eric Erzoah Ehwi, aka ‘Indomie’ an old student from Ezinlibo town to attack Philip Amihere, sadat Bawa and those seniors who held Sadat Bawa. This resulted into a fight between Eric Erzoah Ehwi and Philip Amihere. Hence, the reason for the clash at the boys’ dormitory.

On Sunday morning, 8th May, 2022 the boy’s attendance to church service which starts at 7:00 am and ends at 8:30 am was low. The masters decided to join the Chaplain to know what was happening. When the Masters inquired it was revealed that the boys had decided to stay at the dormitory because they were prevented from continuing the jams in the darkness. Again, they were planning to take revenge on their attackers.

To ensure safety of the students and to prevent them from further attack, they asked them to leave for church service and they resisted. This compelled the masters to give them some lashes and led them to the church service. After the service, they were given a portion to weed on the school farm. It is worthy to know that from the report as produced above, there has been a feud between old students and present students and this has degenerated into reprisal attacks between the feuding parties. The report clearly states that when the teachers refused to allow the students to continue with the jam in the darkness, they resisted and when those in the dormitories were coming back to the hall, the Senior House Master together with other teachers prevented them from doing so.

This gesture of responsibility on the part of the teachers however attracted the displeasure of the students, a move which made the students to abstain from church service the next day culminating into the low attendance at the church service as captured by the report. This necessitated the assistant headmaster and the teachers to visit the boy’s dormitory in other to get the first hand information as to the low attendance.

The report contains that at the arrival at the dormitory nothing shows that the students were ready for church service and indeed some manage to run into the bush whiles others hid in the ceiling of the dormitory and others too locked themselves up. The report continues to ensure safety of the students and to prevent them from further attack. The students were urged to attend church service and when they resisted the teachers were left with no option than to give some lashes and a portion of land to weed on the school farm. The Old students Association of the above mentioned school finds it extremely unacceptable that this events as described above has been given a new twist in the Media Airwaves by Onua Fm and Television Stations as well as on Facebook and captioned ‘students beaten to Pulp’ for refusal to attend church service. Indeed these teachers had been with the students for many years and apart from teaching are seen by the students as parents, role models, guardians and at all times have the good and betterment of the students at heart and cannot be seen to act in any way detrimental to the cause of the students under their tutelage.

The Old Students Association is of the view that the report by media general on the happenings of the school on 7th May, 2022 was totally out of context, irresponsible reportage which is not supported by any iota of investigation and as such vexatious and unmeritorious and should be disregarded with the contempt it deserves. The Association is vehemently opposed to this form of reportage as captured on social media and contends that if such forms of reportage are entertained, for all intends and purposes, teachers and headmasters of senior high school will lose their grip of responsibilities towards the students, a move which will undermine the integrity of teachers and of the teaching profession.

their normal routine on campus. It is only proper and fair that if for any reason student refuse to attend church service in the face eminent attack on them for their own safety but chose to hide in the ceilings, bushes and locked up themselves in the dormitory and as a result they are lashed for their safety and given portions of land to weed to serve as a deterrent to others as part of their molding process as students, same cannot be used under the guise of media reportage and sensationalism and public sympathy to tarnish the image of the school and its antecedent effect on the teachers. It is against this background that the Old Students Association is calling on all stake holders, the Ghana Education Service, the Ministry of education and the Director general of the Ghana Education service to dispassionately look into the matter and resolve any issue which has risen as a result of this unfortunate reportage and repose the confidence and the trust of the teachers in the discharge of their mandatory duties especially in the face of this up-coming Senior Secondary School Examination (WASSCE) which the government has invested so much.

We therefore call upon all persons who have been affected in many ways by this unfortunate report by the media to exercise restraints and have confidence in our institutions and our opinion leaders. The old students will make sure that the relationship between teachers and students shall be restored at the shortest possible time so that our brothers who are preparing to sit for the upcoming WASSCE exams can come out with flying colors.