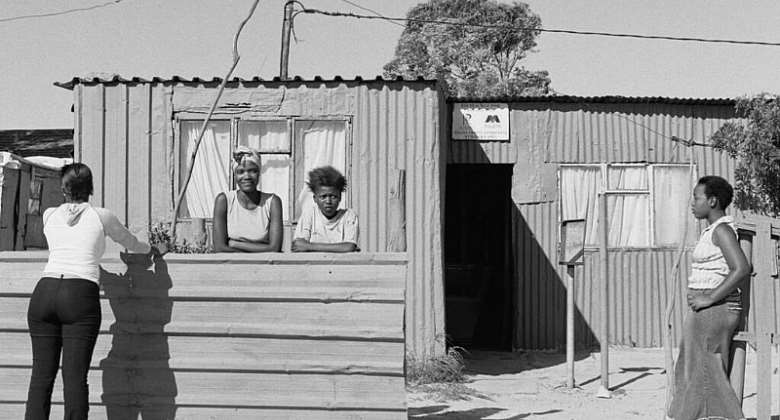 Anne Rearick is one of those photographers who likes to take the long view, literally. For the project "Township", the American returned to shanty towns in South Africa over several years, building longstanding relationships with many of her subjects, part of the trademark of her humanist approach.

"It's always a long process," Rearick told RFI during her trip to France, "because I like to go back over and over again and deepen my relationship with a place or a person. I think the pictures become better and I am more at ease; the person is more at ease.

"I fall in love with the people I'm photographing".

"Township", based on trips taken to South African townships between 2004 and 2015, is the body of work that caught the attention of the organisers of the "L'Oeil Urbain" (Urban Eye) photography festival, held annually in the working-class suburb of Corbeil-Essonnes, 30km south of Paris. This year's exhibition runs until 22 May.

"Township" is a striking visual journey, made up of black and white photographs, instantly immersing the viewer into an environment not often seen by outsiders.

A book of her travels was published by Editions Clémentine de la Férronière, in Paris, in 2016.

Whether it be inside churches, hospitals, schools, or in the streets, her gaze is direct but never intrusive.

Rearick's series sits well with the theme of the 10th edition of the festival: "engagement", translated loosely as "social engagement", or "commitment" to a cause be it human or environmental.

"I bear a responsibility to my subjects; I am honest and direct with my gaze," Rearick says.

"I try to make photographs that dispel stereotypes and reveal new truths to the viewer," she explains.

"I hope that people looking at my work will be able to see the universal ties that connect us to each other, just to name a few: beauty, truth, courage and dignity."

Originally from the east coast of the United States, Rearick discovered South Africa during a trip for her sister's wedding. She met a woman called Sindi, a domestic worker who invited her to visit her home in Langa, in eastern Cape Town.

Taking in the bleak concrete hostel where Sindi and her son lived with dozens of other families with no running water was a culture shock for Rearick.

"I felt really ill at ease because it felt – even in 2004 – like apartheid still existed and as a white person and a white photographer, I felt that especially deeply," she recalls, adding that she was grateful to Sindi for her support.

She felt as much fear and apprehension as she did inspiration, gradually overcoming her initial, confrontational experience.

It was the beginning of many visits, and longstanding friendships.

One of Rearick's most endearing memories of her time was seeing Sindi make a new life for herself, eventually moving out of the township and becoming independent.

"The pictures that I make are not the kind of pictures we normally see or imagine of life in South Africa for black people.

"I think that they are different and my entire goal in making them was to show another side of life and not a single story," the photographer says.

Diving deep into a theme is something Rearick has been doing her whole career and her strong connection to place also applies to France.

For example, her photographs from the Basque country, form the backbone of a fascinating 2004 monograph entitled "Anne Rearick's Eye", editioned as Miresicoletea in Basque, with another book in preparation. Her Basque photographs will appear in the Mérignac Photo event, throughout the May.

The Covid pandemic may have temporarily put a stop to her travels, but she described the period as liberating.

She says it allowed her to take stock of her work in a different way. Rather than taking pictures, she began to question the usefulness of her work.

"I really spent a lot of time reflecting on the work and thinking about my place in the world of photography. Is it serving anyone? Is the work valuable or are there other things I can do? I always have questions when I'm photographing, especially about communities that are not my own."

She points out that she would probably do things differently today when it comes to photographing black communities in South Africa.

"I think it's time for white photographers to step aside and let people of colour tell their own stories," she says, indicating that it was essentially white men who took charge of documenting life in the townships.