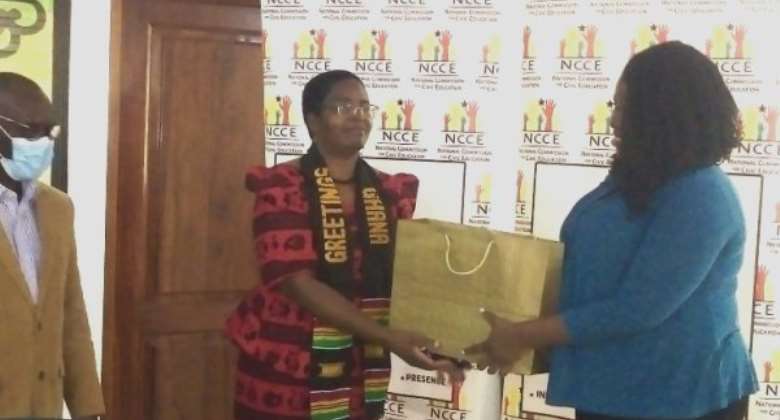 Dr Elizabeth Gomani Chindebvu, Principal Secretary of the Ministry of National Unity of Malawi, has lauded Ghana's National Commission for Civic Education (NCCE), describing it as the “best civic education institution” on the African continent.

Dr Chindebvu gave the commendation when she led a four-member Malawian delegation, to interact with officials of the NCCE, in Accra.

The meeting formed part of a three-day working visit by the delegation in the country, to study Ghana's progress and achievements in the area of civic education.

Explaining the delegation's mission in Ghana, Dr Chindebvu, who is also the Team Lead, said as part of service reforms taking place in the public sector in Malawi, the Ministry was in the process of lobbying Government to transform NICE Trust into a National Commission for Civic Education.

As a result, she said, it was only right that the Ministry understudied other countries on the continent who had successfully implemented such policy, in order to learn from them.

Dr Chindebvu said with Ghana's decades of experience in active civic engagement, the government of Malawi believed that its civic education structure was the best on the continent and worthy of emulation.

Areas the delegation seeks to understudy include the establishment process and legal framework of the NCCE in Ghana, set up and structure of the Commission, its core functions, mandate, vision and mission, delivery methods and approaches,

Other areas are the Commission's stakeholders and partner institutions in both public and private sector, relations and collaboration with educational institutions regarding provision of citizenship studies and the national youth service.

“The Ministry also expects the delegation will learn more on how the Ghana National Commission for Civic Education operates and manages its affairs,” she said.

Ms Kathleen Addy, Acting Chairperson of the NCCE, explaining the formation of the Commission said, the institution was one of three unique commissions set up under the 1992 Constitution, including the Electoral Commission.

The rest include the Commission on Human Rights and Administrative Justice, and to some extent, the National Media Commission, she added.

“These three commissions are unique in the sense that, they are independent. Meaning that, they don't take instruction or directive from the Executive.

“We the NCCE report to Parliament, and not the Executive. We are funded by the public purse but our reporting line is to Parliament, that is, the representatives of the people,” she explained.

Ms Addy emphasised the need for down-to-top approach of policy formulation, saying the effectiveness of every civic education policy depended largely on its acceptance by the grassroots, as well as the citizenry.

Mr Samuel Asare Akuamoah, NCCE Deputy Chairman in charge of Operations, said despite the successes the commission had chalked since its establishment, it remained bedeviled with numerous challenges.

These challenges include inadequate funding, public overlapping mandate of the commission, Executive's continuous appointment of chairs for the commission and lack

Mr Akuamoah, therefore, advised the Malawians to be wary of political interferences in the work of the commission as that would undermine its authority and render it irrelevant.

“You need to look at how it is created if the commission is to have independence to carry out the mandate assigned to it,” he advised.

Malawi becomes the 2nd country in Africa to understudy Ghana's civic education structure, after The Gambia did likewise in 2019.

In attendance were heads of the various departments of the commission, as well as other members of staff.