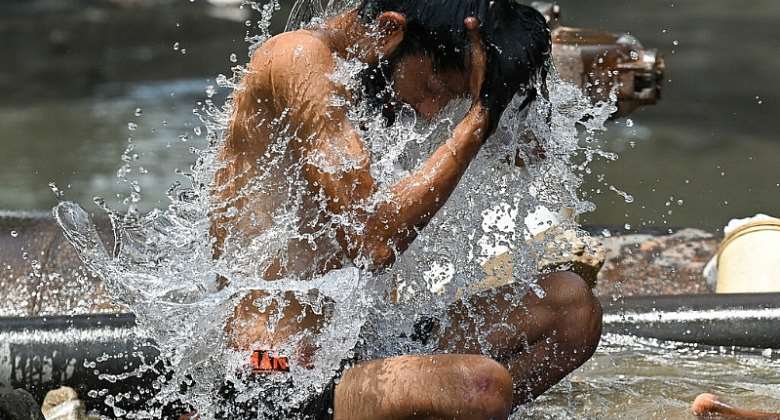 Priya Kumari, 38, is constantly mopping the sweat from her face as she dumps a metal tray of rubble into a landfill site before making the journey to collect more in a construction site in New Delhi.

Many parts of the capital feel like they are on fire as the heat comes off the road in blistering waves.

Priya is among the tens of millions of Indians who are struggling to cope with the relentless heatwave, with some regions of the country reporting the highest temperatures in more than 120 years.

“Every year, I work on construction sites across the city but this time there is no respite from the heat. It feels different now … more uncomfortable,” Priya told RFI.

“I take a break every 45 minutes otherwise it will be extremely difficult to work in this unbearable heat.”

According to government records, construction is one of the key sectors in which India's migrant workforce find employment and puts the number of construction workers in the country at more than 74 million.

The north of India, especially Delhi and Rajasthan, has exhibited some of the world's hottest "wet-bulb" temperatures – a measure that combines the effects of heat and humidity and provides a better measure of heat stress on the human body than air temperature alone.

Temperatures in the mid-to-high 40s (degrees Celsius) are not usually seen in north India before May.

But this year it started in the second week of April, stretching the hot season by weeks.

In the western state of Gujarat, already reeling under severe heatwave conditions, authorities in the city of Ahmedabad have issued a red alert with temperatures registering above 46 degrees.

“This is excruciating, and this blistering weather will stay with us for a while,” Jagdish Patel, a businessman told RFI.

Health officials in Gujarat have issued advisories to hospitals to set up special wards for heat stroke and other heat-related diseases due to the rise in temperatures.

“Several schools have already announced reduction in outdoor activities in view of the sweltering heat. Children simply can't cope in this weather,” Manisha Pandey, a schoolteacher from Jaipur told RFI.

India experienced its hottest March on record following a string of early heatwaves this spring.

And power outages have become frequent across the country with the rising temperatures.

The power crisis has spread across more than half of all states and the nation's coal-dominated energy system is expected to come under further strain in the coming weeks as power demand is set to top a recent record high.

According to one survey conducted, just 12 percent of India's 1.4 billion citizens have access to air conditioning, which means hundreds of millions of people are simply unable to cool themselves when their bodies reach the point of heatstroke.

One of the main reasons for this extreme weather events is attributed to climate change.

Some other reasons for the extreme departure from normal maximum temperatures include local weather conditions and other factors like increasing concretisation, deforestation, and changes in land use.

Dozens of people are thought to have died, schools have been forced to close, and taps have run dry.

India's western state of Maharashtra has recorded 25 deaths from heat stroke since late March, the highest toll in the past five years.

Brutal heatwaves are not new in India. But experts say this weather event is particularly worrying because of its early timing and spread.

Arise Ghana demo: They're political elements not professiona...
40 minutes ago