Terror attack in Togo should be wake up call – WACCE 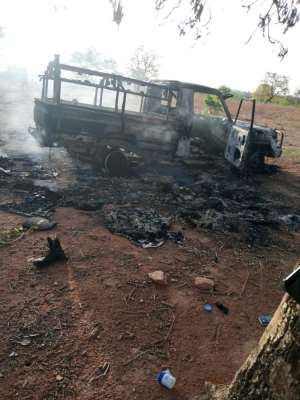 The West Africa Center for Counter Extremism (WACCE) says the terrorist attack in neighbouring Togo that claimed the lives of eight soldiers should be a wake-up call to all security agencies in Ghana.

According to the centre, the activities of such groups closer to Ghana's borders pose a major security threat to Ghana.

A report by the West African Centre for Counter Extremism says Ghana is at a high risk of being targeted by terrorists due to protracted chieftaincy disputes and socio-economic challenges in the country.

The centre says Ghana is saddled with a number of triggers, making it possible for extremists to take advantage of.

“We are more vulnerable than the public probably would see or acknowledge, and it is important that we shied away from pretending that we are so insulated from the threat of violent extremism.”

“It is important that we begin to speak in terms that reflect the actual reality we are facing and what we can all do to help prevent it from happening from our soil,” he said.

Eight soldiers were killed and 13 wounded in an attack in northern Togo on Wednesday, according to the Togolese government.

This was the first deadly raid on its territory by Islamist militants, who have claimed thousands of lives in other West African countries like Mali and Burkina Faso.

According to reports, the attack by heavily armed gunmen took place before dawn at an army post in the Kpendjal prefecture near the border with Burkina Faso, the government said in a statement sourced by Reuters.

Some security analysts suspect the attack may have been the work of a local al-Qaeda affiliate that is based in Mali.