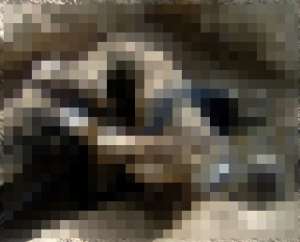 Residents of Ejura Moserate, a suburb of Ejura Sekyeredumase in the Ashanti Region witnessed a sordid spectacle on Tuesday, May 10 when they woke up in the morning to spot a dead body exhumed from a tomb at the town's cemetery.

The horror act, according to an eyewitness was carried out by three unknown young men suspected to be 'Sakawa boys' for ritual purposes.

Narrating how he spotted the alleged horrible scene at Moserater cemetery in Mempasem Electoral Area to the elders of the town, the eyewitness, Mr Isidini Ibrahim said he woke up at dawn, precisely at 3.30am on that day to attend to natures call.

Ibrahim noted that on his way to the public toilet which was behind the cemetery he saw flashlights from the direction of the cemetery.

According to him, after monitoring for some few minutes he saw three young men who were busy digging into the grave. He indicated that he mustered the courage to confront them to know their mission at the cemetery at that odd hour.

He continued that the three young men sensing someone (him) approaching them jumped into the thorny bush and escaped.

Ibrahim said he was taken aback when he spotted a dead body the three boys had exhumed from the grave with some parts of the body tempered.

Ibrahim told this reporter and some journalists in the presence of elders of the town for investigation to be conducted to arrest the perpetrators.