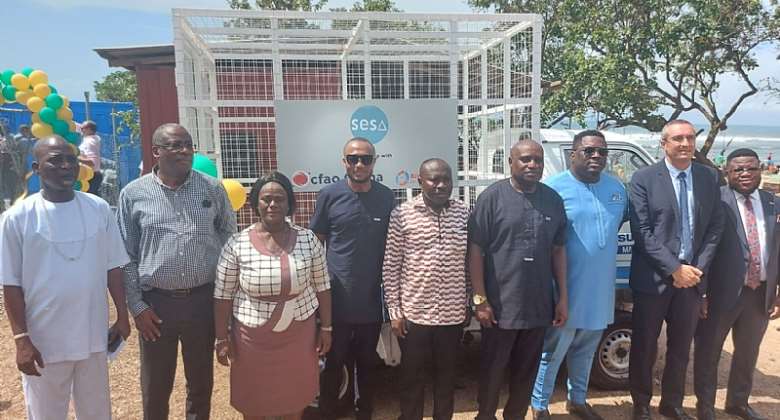 The Nungua Beach has been given an ultra-modern plastic collection facility to help curb the increasing waste menace in the locality and the region at large.

The occasion was colourful as it saw a lot of people in attendance.

Indiscriminate dumping of plastic waste into our sea continues to wreck havoc on aquatic life and humanity alike.

According to a study, the increasing cases of death in turtles, sharks, and other fishes on our shores is as a result of the contamination of the sea. The Nungua center is the first of its kind and was created through a collaboration between GIZGPS, CODA, CFAO Ghana PLC, and SESA.

Speaking during the launch ceremony held at Nungua Beach, the Managing Director of the CFAO Automotive, Paulo Fernandes, expressed worry about the increasing number of plastic bottles that find their way into the sea.

According to him, if this negative trend is not brought under control, Ghana will have to spend more money to bring the sea to its original state in the coming years.

He hinted that in Ghana, especially in most of the coastal communities, plastic waste had become an important social and environmental concern.

"The goal of this collection centre is to increase plastic recycling in the community by collecting all plastic waste before it enters the sea.

"This will also create an opportunity for the indigenes to collect same and get rewarded as well. When we collect these plastic bottles on a daily basis, it will be beneficial to the community and, by so doing, the Nungua Beach will be free from filth and, for that matter, plastic waste,” he assured.

The Chief Executive of the Coastal Development Authority (CODA), Ahmed Jerry Shaib, on his part, touched on the need for residents to be mindful of the rate at which collection bins end up in their rooms.

According to him, the consequences of these actions and inactions are the contributing factors to cholera, typhoid, and malaria as well as the aspect of threatening coastal ecosystems' health.

He cautioned against poor sanitation practices and assured them of the government’s commitment to change the status quo.

"The President, His Excellency Nana Addo Dankwa Akufo-Addo, is committed to ensuring that coastal development is not traded for anything. This is one of the reasons why aboard motors were reduced to cushion fishermen. However, the onus lies on us to desist from any form of indiscriminate dumping of plastic waste. That way, we will be free from the diseases and Nungua Beach will be a place for relaxation and comfort,” he noted.