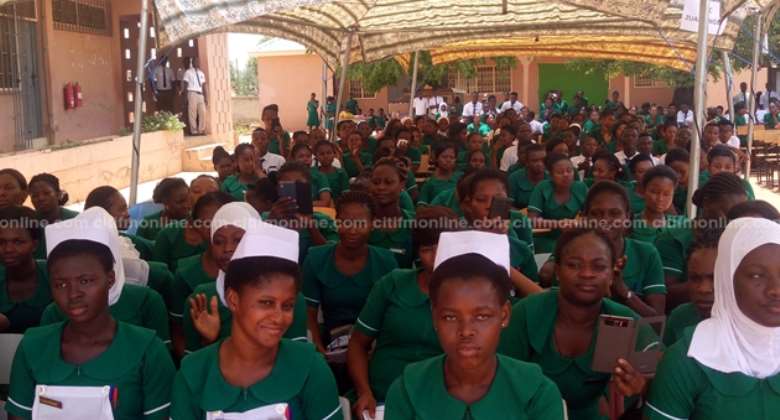 The principal of Mampong Nursing and Midwifery Training College by either an act of incompetence or sheer wickedness, has not only inconvenienced about 168 students of the school but cost, or almost cost, them, their career to become of service to their people and nation.

The students of the school by their future career intend to become carers of sick people gone to hospital for treatment as either outpatients or inpatients. They may likely by their profession be able to attend to sick people wherever they happen to be; in homes, public places or hospitals. These are the types of useful people to society that the principal of the college has intentionally or otherwise, been killing their dream.

The principal acting diabolically or cluelessly, has made the lives of the students a complete hell on earth.

She could not stand up tall to defend the very decision of “amnesty” she granted all the alleged failed students who as a result of the deadly infectious Covid-19 pandemic, could not physically attend classes/lessons hence could not do better at their 1st and 2nd semesters examinations.

This decision taken locally in Mampong by her when principals could take their own decisions deemed to be in the best interests of the school, students and the nation, is no longer possible. This is because the government or the national management of the Nursing and Midwifery Training Colleges have centralised the nursing training colleges examinations and assessments in Accra.

Nevertheless, if she were a person that worth her salt, she could have written to inform the Central Management or whatever the board is called, of the decision she took locally, hence they should not use the students’ poor marks for their first and second semesters (Level 100) to add to that of their third and fourth’s (Level 200) to cumulatively determine their Grade Point Average (GPA) pass mark.

In some countries, as cited in my recent publications, the students did not sit for any exams at all, yet the final year students were awarded grades by their class or subject tutors on assessment of their class/lesson performance.

Universities did accept the grades so awarded to the students to admit them into their institutions. Therefore, it would not have been only the principal of the college that took such an unordinary decision.

Every unique problem or occurrence must have their unique solution. This is truly conspicuous when it comes to law where it is said, each case is judged on its own merits. The period of Covid-19 pandemic called for a different approach to promoting students to their next higher classes.

Anyway, for the attention of the affected students, their parents or guardians, I have been alerted to a favourable decision taken by the Health Minister in their behalf. It will bring smiles back on their face.

Should it go as I have been told by a reliable source, the Minister has directed that the principal allows all the students back to school.

The communique to that effect has been passed to the Board of Governors of the college, I have been told. When the principal was contacted about recalling the affected students from their current abodes, be they their homes or privately rented hostels, she is alleged to have said, “the school is now on holiday. I shall see what I can do when school reopens”

If the Minister has really directed as communicated to me from a reliable source, there shouldn’t be any hurdles of ifs or buts to be littered on the path of their re-admission.

The students have not been treated fairly at all. They have been sabotaged. Why do I say this, one may ask? Apart from the numerous discrepancies in their GPA results, surely bordering on incompetence, if not malignity, by the principal, many an affected student that went to the Academic Officer of the college to be issued academic transcript could not get it.

The Academic Officer, Paul Antiarefe, has refused to issue it to them for the past two months. Without the issuance of the academic transcript, those students who had decided to seek admission in other nursing colleges elsewhere in Ghana, could not do it. What a similitude of the Akan proverbial sayings, “Wa bo me abra me su” or “wa tua ma no atua me to”, to wit, “You’ve beaten me but forbidden me to cry” or “You’ve blocked my mouth and my anus”. They mean, you have maliciously blocked all my chances.

I shall be the happiest person to see the affected students recalled to pursue their future nursing and midwifery career.

Again, I shall advise them to live exemplary lives worthy of emulation. They should not be like most of the bad nurses in the nation’s hospitals who have no respect for patients but treat them worse than used rags only good for chucking into the skip.

By the way, who was Florence Nightingale? “She is mostly known for making hospitals a cleaner and safer place to be. Florence Nightingale OM RRC DStJ was an English social reformer, statistician and the founder of modern nursing. Nightingale came to prominence while serving as a manager and trainer of nurses during the Crimean War, in which she organised care for wounded soldiers at Constantinople”.