Police killing of French-Algerian student Oussekine brought to the screen

By Alison Hird with RFI
Algeria 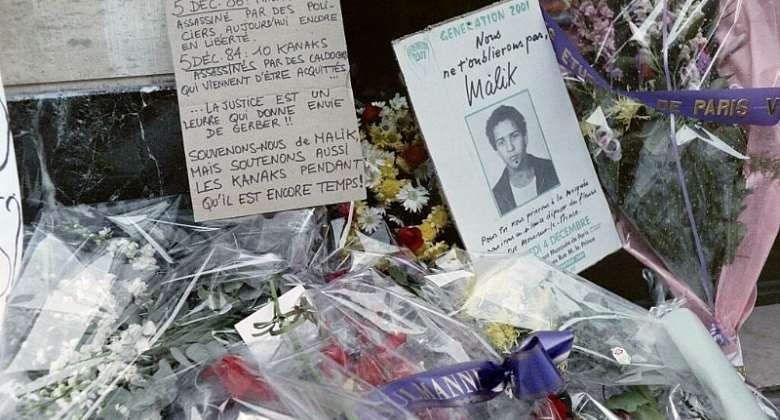 Thirty five years after Malik Oussekine was beaten to death by police during a student demonstration, his story is finally being told in a four-part series beginning Wednesday on Disney+ and a feature film debuts at this month's Cannes Film Festival.

On the night of  6 December, 1986, two police officers beat 22-year-old Malik Oussekine to death on the sidelines of a student protest in Paris.

He hadn't been involved in the demonstration, but was nonetheless chased by voltigeurs – a special baton-wielding police unit on motorbikes.

The youngster's death sent shockwaves through the population – triggering weeks of unrest.

The French public prosecutor claimed Oussekine had died of a heart attack, not from the beatings.

Several prominent intellectuals took part in protests which led to the unprecedented conviction of the officers.

While they received only suspended sentences, it marked a turning point in both French race relations and attitudes towards police violence.

But Oussekine's story had never been the subject of a full length dramatisation until now.

Two versions are being released this month: a film "Nos Frangins" (Our Brothers), premieres at the Cannes Film Festival, and a Disney+ mini-series, "Oussekine", is released worldwide on Wednesday.

The four-part series, directed by Antoine Chevrollier, retraces the drama of Oussekine's death, how security services tried to cover it up and his siblings' courageous fight to establish the truth.

"The important thing is to make this name and this story resonate so that we never forget," Chevrollier told AFP.

"He was attacked because of the colour of his skin. He is France's Arab George Floyd," historian Pascal Blanchard told French news agency AFP, referring to the African-American whose death at the hands of police in 2020 sparked massive international protests.

He said much of French society had allowed Oussekine's story to be brushed under the carpet as with so much of its troubled history with immigrant populations.

20,000 rally in Paris for black man who died in police custody

"It's not a question of whether Malik Oussekine has been forgotten, but by who?" said Blanchard.

France is still wrestling with the trauma of its colonial period, particularly the bloody war of independence in Algeria from 1954 to 1962.

Among its darkest moments was the massacre of up to 200 Algerian protesters by police in Paris on October 17, 1961 – many of them shot dead and their bodies thrown into the Seine.

The events of that day went officially unacknowledged for decades until President Emmanuel Macron finally described them as "inexcusable crimes" at the 60th anniversary last year – though he stopped short of apologising.

Oussekine's death was crucial in marking the end of total police impunity – the first time that officers were convicted for this type of crime, according to the family's lawyer, Georges Kiejman.

It has taken until now, as the grandchildren of the original wave of North African immigrants comes of age, for there to be enough distance and confidence to address the past.

"For our generation, it is important to say that these individual stories form part of the French national story. They are not separate. These are French stories," said Faiza Guene, 36 and born to Algerian parents, who helped write the screenplay for "Oussekine".

Director Chevrollier, who grew up in a small village in the Loire Valley, says he only became fully aware of the power of Oussekine's name when he moved to Paris and began to hang out with people from different backgrounds.

He first heard the name in the rap song "L'Etat Assasin" by the band Assassin.

"I hope the series will help ease the tensions that are unsettling the country. It is time that we in France begin to treat these historical cancers."