With DRC elections scheduled for next year, access to information and political news is critical for the Congolese public to make informed decisions 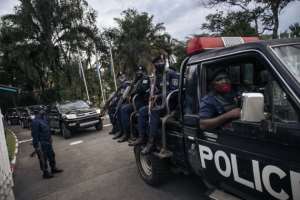 Dakar, May 10, 2022 — Congolese authorities should immediately drop all criminal proceedings against journalists Albert Muhila, Dieu Agba, and Patrick Gbondo, and reform the country’s laws to ensure journalists are not jailed in connection with their work, the Committee to Protect Journalists said Tuesday.

On April 22, officers with the Congolese National Police Mobile Intervention Group arrested the three journalists, who work as reporters and presenters with the privately owned broadcaster Radio Mwana Mboka, at the station’s office in the northwestern town of Bumba, according to a report by the local press freedom group OLPA and Radio Mwana Mboka program manager and chief of staff José Dossa, who spoke to CPJ in a phone interview.

Authorities released the journalists from Bumba Central Prison on May 4 after they paid 180,000 Congolese francs (US$90) each to Bumba prosecutor Fidèle Atafu, according to Agba, who spoke to CPJ via phone. He said Atafu told them each journalist was responsible for paying him a further 180,000 francs and he would call them within five days, but Agba said the journalists had yet to be contracted about the additional money.

Police said the journalists were detained in relation to a criminal insult complaint over an April 20 broadcast in which they all appeared, Agba told CPJ. He said police did not identify who filed that complaint. In that broadcast, guests of the program criticized the governing capacity and electability of politician Jean-Pierre Lihau Ebua, according to Agba, Dossa, and the OLPA. CPJ was unable to independently review that broadcast.

“Congolese authorities should immediately drop any legal proceedings against journalists Albert Muhila, Dieu Agba, and Patrick Gbondo and ensure they can cover issues of public interest without fear of arrest,” said Angela Quintal, CPJ’s Africa program coordinator, in New York. “With DRC elections scheduled for next year, access to information and political news is critical for the Congolese public to make informed decisions about their country’s future.”

Agba told CPJ on May 9 that he had not received any new information about the case, and no court date had been scheduled. When CPJ called Atafu on May 3, he confirmed that the journalists were in custody but said he could not provide further details on their case. He did not answer CPJ’s subsequent follow-up calls seeking comment.

Jean-Pierre Lihau Ebua is the DRC’s deputy prime minister, an elected representative from Bumba, and the minister of public service and modernization of public administration, according to Agba and a biography page published by the prime minister’s office. CPJ called him for comment, but he did not answer.

When CPJ called Serge Mongolu, governor of Mongala province, which includes Bumba, he hung up as soon as CPJ asked about the arrests.