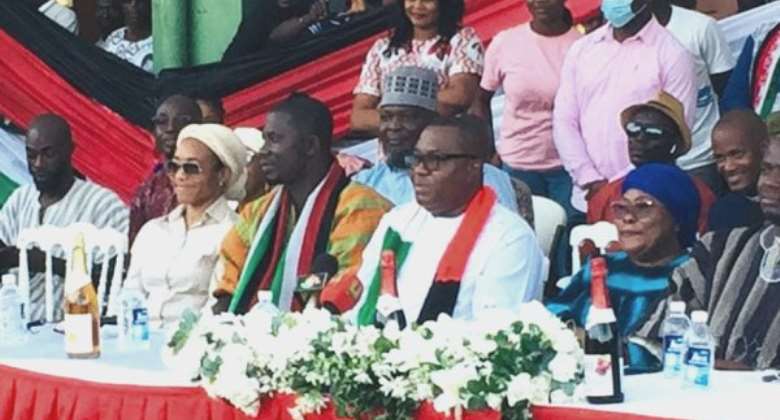 He said: “It is an acceptable fact that global events such as the Russian-Ukraine war, COVID-19 has imposed challenges but bad governance has worsened the plight of Ghanaians. If your management of crises is weak, operational hiccups will dislodge your economy.”

Mr Ofosu Ampofo, therefore, called on the NDC members to hit the ground and work for mother Ghana, saying, we have a mandate to recapture political power in election 2024 to restore the Ghanaian dignity, good governance, and put in pro-poor policies to alleviate the difficulties.”

The NDC National Chairman stated this at an event organized by Mr Ernest Henry Norgbey NDC Member of Parliament for the Ashaiman Constituency dubbed: “Honouring our Heroes and Heroines” to reward and celebrate mothers.

It was attended by some NDC Members of Parliament in Accra and the Volta Region, National, Regional, Constituency, Branch Executives, and a section of the public at Ashaiman.

Mr Ofosu Ampofo charged NDC executives at various levels to frequently visit cadres and comrades who have served that party but were not in active service anymore to know how they were faring.

He said as the first step toward recapturing political power, the NDC would soon outline its internal reorganization strategy ahead of the 2024 general elections.

He, therefore, called on all party sympathisers to participate in the reorganisation process.

Mr Ofosu Ampofo expressed gratitude to the Member of Parliament of Ashaiman for putting together the programme to reward the constituents.

Mr Norgbey, who organised the event to celebrate mothers and honour some key members within the Ashaiman Constituency revealed that, the event, the seventh edition, sought to improve the livelihood of constituents.

The Ashaiman Member of Parliament explained that the NDC party needed to honour people who have served that party at various stages stressing that such gestures would energize other members to also put in their best to help the party mobilize its members to work hard for electoral victory in 2024.

Ms Zainab Mohammed, Deputy Communications Officer of the NDC in Ashaiman Constituency, in an interview with the Ghana News Agency, added that over 1,000 mothers including single mothers were feted by the Member of Parliament.

She said some 32 other individuals were presented with an award for their service to the NDC party in the Ashaiman Constituency.

Latest Photo Reports
Catch up with all the political quotes from our politicians.
Advertise here
More from NDC News
ModernGhana Links
No delegate will be neglected if I'm elected — Ejura Constituency Secretary aspirant assures
So Kwesi Pratt is hoping for my downfall because of his benefits from NDC? — John Boadu
‘Enough is enough; NDC will save Ghanaians from NPP’s toxic leadership’ – Ofosu Ampofo
TOP STORIES