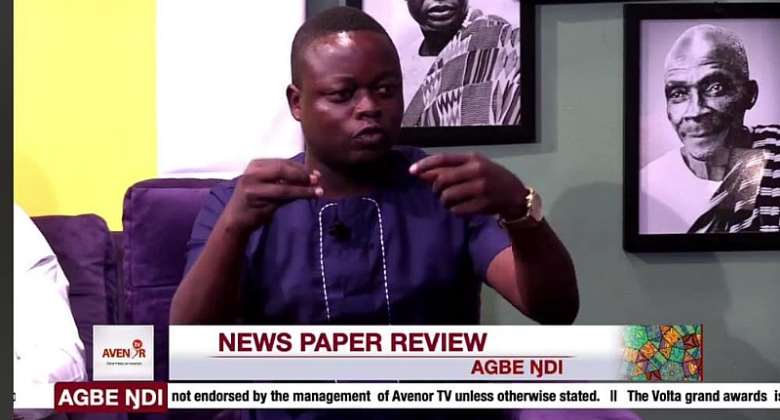 Mr. Japhet Festus Gbede, a communication team member of the opposition National Democratic Congress in the Volta Region's Akatsi South Constituency, has stated that Ghana has been used a collateral for President Nana Addo Danqua Akufo-Addo and his appointees to acquire loans into their pockets.

In a newspaper review segment on Avenor TV's "Agbe ndi' program this morning, the young and vibrant NDC deputy communication officer hopeful for Akatsi South Constituency criticizes the President for his excessive borrowings for consumption.

In his statement, Japhet Festus Gbede cautioned the president to curb his insatiable appetite for borrowing in order to keep the national debt from rising further.

After learning of a possible terrorist attack on Ghana, the outspoken Japhet advised President Nana Addo and his NPP government to refrain from borrowing and instead focus on resolving the country's economic issues, lowering the unemployment rate and fulfilling its 2016 and 2020 campaign promises.

Ghana has been designated as a country with debt distress, and Mr. Japhet caution the NPP administration to tred cautiously so as not to imperil future generations in the country, which is likely to spark an uprising.

He challenged the president to restore the economy.

Hottest Photo Reports
Catch up with all the political quotes from our politicians.
Advertise here
More from NDC News
ModernGhana Links
'Russia-Ukraine war, covid-19 pushed us to IMF but NDC went due to mismanagement' — Afenyo-Markin jabs Minority
'Mahama has finished his eight years, let's change him or else we will lose 2024 elections' — Yaw Boateng Gyan
Politics is all about positive impacts — Nii Armah Ashietey
TOP STORIES